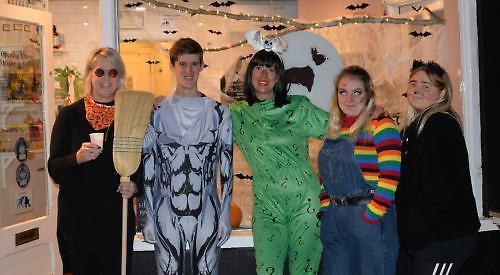 Six-year-old Kiwi, a pug and Jack Russell terrier-cross, impressed the judges at the spooky annual show at grooming parlour Naughty Mutt Nice in Reading Road with her take on Batman.

She had a face mask, cape and the iconic bat symbol while owner James Shimmen wore a matching Robin shirt.

Mr Shimmen, 37, from Emmer Green, won a treatment at the parlour worth £60 and a dog bowl for Kiwi.

He said: “She has been part of the family for so long. I am a fan of Batman and that was the inspiration for the costume.

“We entered a couple of years ago when she was dressed as a pirate. I don’t think she made the top three that year so that is why we wanted to come back and try to win.”

Karole Robertson, owner of Naughty Mutt Nice and one of the judges, said: “It was a tough decision because all the owners had fantastic ideas and had put in lots of effort but Kiwi was brilliant and the costumes of the dog and the owner matched. It was very original.”

The competition, which has been running for five years, was also judged by grooming assistants Mandy Regan and Josh Mill, groomers Tilly Matthews and Josie Lambourne and guest judge Laura Shaw, who donated the dog bowl prize.

Each entrant was given the chance to parade on the “catwalk” with their dog outside the shop and there were prizes for the top three dogs.

Second prize, a wash worth £50, was awarded to Meggy the border terrier, two, who belongs to Anna Adshead, of Belle Vue Road, Henley, and was dressed as Scooby Doo.

Third was five-year-old Poppy, a golden retriever who belongs to Jenny Aspdend, of Greys Road, Henley, and wore angel wings.