200 needed at sleep out for homelessness charity 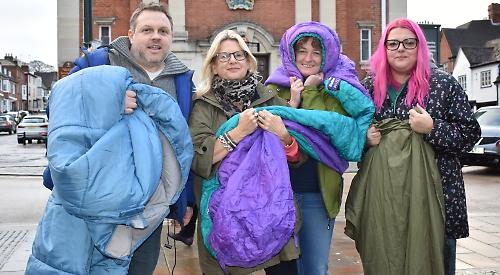 ORGANISERS of Henley’s first Big Sleep Out hope that 200 people will brave freezing temperatures for a good cause.

The event is the idea of Carl Williams, a businessman, and will be held in Market Place on Saturday December 7, starting at 8pm.

Participants are asked to sleep outdoors and raise money as part of the World’s Big Sleep Out scheme, which is being held in more than 50 countries.

Mr Williams, who specialises in sourcing and supplying items for auctions and charity events, said: “I do a lot of work in London and I see the problem of homelessness first-hand.

“I see people living in tents and in doorways and I have no idea how they cope. I will always offer to buy them a hot drink.

“I don’t want to make it a political thing as there are obviously reasons why people become homeless. It is more important to focus on what we can do to help them.

“These people who have fallen on hard times may have family issues or mental health problems and we need to make sure we do everything we can. Henley has never had a Big Sleep Out but it is a very charitable town. It is as much about the money as it is about raising awareness.”

The event is likely to feature a celebrity guest for a “bedtime reading” and organisers also hope to have some form of entertainment.

Businesses are being asked to get involved, either by donating clothes and blankets, or by offering hot drinks.

It costs £5 to take part and people can also seek sponsors to try to raise more money.

Mr Williams, who lives in Reading Road with his wife Katie and their three children, runs SIEKTA from his office in Hart Street and often works with charities.

Any profit made from items sold at auctions goes directly to charity and Mr Williams estimates that he helps to raise about £250,000 a year through his work.

He said that while homelessness is not a problem in Henley, we shouldn’t ignore it.

“We are sheltered from those kinds of issues because this is an affluent area. I don’t think we appreciate just how lucky we are,” said Mr Williams. “Sometimes we don’t see the problem that is going on in cities but it does not mean that it is not important for us to help out.

“My main concern is if it rains but homeless people have to live like that every day, not knowing what to expect.

“We are all lucky enough that we can go home the next morning but they don’t have that luxury.”

Mr Williams obtained permission for the event from Henley Town Council and is being supported by town councillors Kellie Hinton and Sarah Miller, who will be taking part.

The number is limited to 200 for health and safety reasons and the organisers are waiting to find out if tents are permitted,

Councillor Hinton said: “We don’t have a massive problem in Henley with homelessness but that does not mean we can’t help raise money and awareness.

“We have the best community spirit and the best fundraisers in Henley. There are a lot of people who want to do good and this is such a good idea to harness that energy.

“I am so nervous about it because it is going to be freezing but in a way I am also a little bit excited. I want to experience what it is like for someone who is homeless.

“We are hoping to make it a fun event by having entertainment. We want to make it real but also fun enough so that people will want to take part.”

Councillor Miller said: “This is a great way of highlighting the issue of homelessness and raising awareness. Carl is very passionate about it and as soon as he approached us we wanted to get involved.

“Some people might think it is a bit patronising for people from Henley to do this, but it is so important that we do.

“I have camped at festivals but I have no idea how I am going to get on with this. Of all the things I have signed up for, this is probably going to be one of the hardest.

“But leaving my nice warm home for one night is a small price to pay compared with what these poor people have to go through. Nobody wants to see people begging.”

The charity Shelter estimates that 320,000 people will spend Christmas living on the streets.