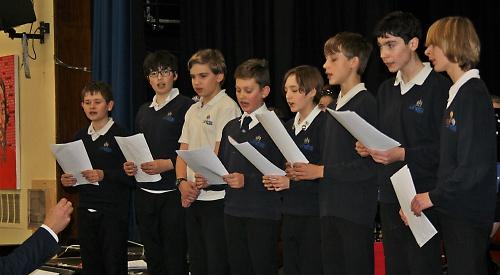 The guests were entertained by year 1 and 2 pupils from Woodcote Primary School, who sang songs from their recent Nativity play The Angel Express, and musicians from the secondary school.

The Langtree School orchestra played instrumental versions of Rock Around The Clock, Pachelbel’s Christmas Canon, Merry Christmas Everybody by Slade and Fairytale of New York by Kirsty MacColl and The Pogues.

Choirs of different ages sang popular festive songs including Gaudete, I Saw Three Ships, John Lennon’s Happy Xmas (War Is Over) and I Wish It Could Be Christmas Every Day by Wizzard.

There were also performances by the school’s flute group and drama club, which enacted scenes from ’Twas The Night Before Christmas by Clement Clarke Moore.

The guests were served drinks and snacks as they sang along to Hark The Herald Angels Sing, Once In Royal David’s City, Ding Dong Merrily On High, O Little Town of Bethlehem, We Wish You A Merry Christmas and O Come, All Ye Faithful.

They came from care homes and sheltered housing complexes, including Mowforth House in Woodcote. Helpers from the school’s year 8 leadership team wore Christmas jumpers and served food and sat chatting with the guests between performances.

Headteacher Simon Bamford said: “We were very pleased with attendance because it had been dropping in recent years but it was right back up, which was encouraging. Our year 8 pupils did a great job of planning the activities as well as meeting and greeting on the day. It’s a great opportunity for them to take on some additional responsibility and they were a credit to themselves and the school.”

Gift hampers were given to several elderly villagers who were unable to attend.