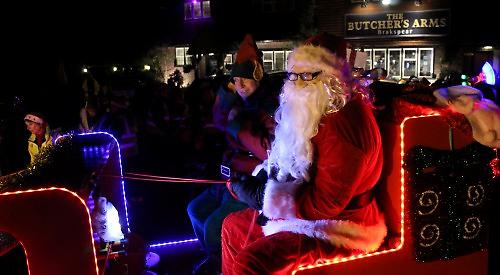 Jordan Johnstone drove the tractor around the village pulling a trailer made to look like a sled in which organiser Helen Coyne, who was dressed as Father Christmas, waved to people in the streets.

They were accompanied by more than 20 volunteers wearing Santa and elves‘ ’hats collecting donations and handing out chocolates and sweets.

The procession finished at the Butcher’s Arms pub, where they had mince pies and mulled wine courtesy of landlord Rob Blues.

Ms Coyne said: “The atmosphere was amazing and everybody was dancing in the streets. This is the best amount we have raised and I’m absolutely overwhelmed.”

She is pictured with “elf” Richard Mackenzie-Black.