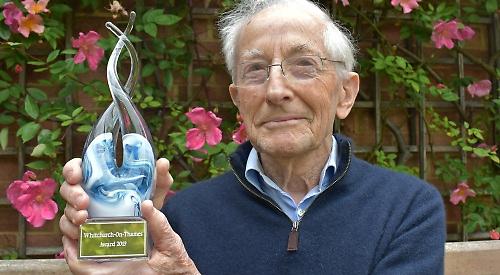 The group set off from High Street and walked up the hill to Coombe End Farm, near Goring Heath. They then followed the lanes to the Hartslock nature reserve before returning via the Thames Path.

The five-mile walk was one of several drawn up by villager and veteran walker Eric Hartley. The 87-year-old helped to revive many of the area’s footpaths in the Seventies and has published several books of walks.

He launched the New Year’s Day walk as part of a quarterly programme which he used to lead but can no longer do so due to his age.Last week’s walk was organised by members of the Whitchurch Society.

Mr Hartley said: “I’m really pleased that it was well attended because numbers had been dropping over the years.

“I know they were happy with how it went and I’m told everyone enjoyed themselves. The weather was fine, which was helpful.”

Mr Hartley, who won last year’s inaugural Whitchurch Award for his contributions to the community, has also shared his life story in a short film.

The 12-minute piece, shot by fellow resident Nick Brazil, explains how he and the Chiltern Society pressured landowners to clear overgrown footpaths and negotiated the installation of new steps on Hartslock bridleway.

Mr Hartley said: “I was slightly embarrassed by the attention but my kids loved it. They were watching it on YouTube on Christmas Day.”

To watch the video, visit whitchurchonthames.com