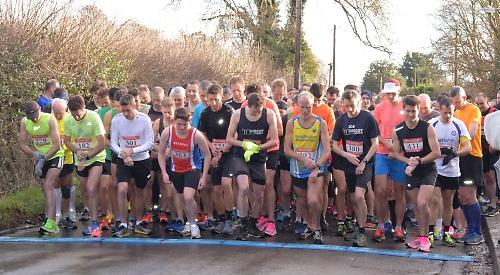 Jonathan Westlake, 40, from Emmer Green, was taking part in the annual race on Sunday morning for the first time.

The trio were competing for the advantage throughout the race, which followed a hilly circuit through the countryside between Goring and Woodcote.

The 477 participants started outside Langtree School in Reading Road and ran along Goring Road, then down the hill in Battle Road to the outskirts of the village.

They then ran along Icknield Road, which is mostly a steep climb, and on to the finish in South Stoke Road, Woodcote.

Afterwards, Mr Westlake was presented with a trophy in front of the village hall.

He said he was “step for step” with his rivals for the majority of the course.

He said: “When you are running alongside other people, you don’t want to slow down and let them get ahead.

“I had to lock into a certain pace and just hope I had enough to beat them. We were together as a three for most of the race. I just had a slightly faster kick at the end. I was in quite a bit of pain when I crossed the line.

“This race is very hard. It is 5km of flat out downhill and then 5km of uphill. You have to save your energy for the end.”

Mr Westlake, who won the Emmer Green 10km in October, said: “I am a keen local runner but I don’t do many races, probably only two a year.”

He said he would be going out for a meal with his family to celebrate the victory as well as his birthday, which was on Tuesday.

Mr Hull, 40, said: “I am just getting back into running after having children. I am very happy with second and with the race as a whole.

“The downhill bit was about keeping up with the other two.

“Coming up the hill was a lot of effort but I felt I could keep up with both of them. It just came down to the last 300m and I tried to keep up.” He added: “It is my father-in-law’s birthday today, so we will be going out for food later.”

Mr Lucas, 28, was happy with third place as his finishing time was only one second slower than when he won the race in 2018.

He said: “This was my sixth time running it and this was one of my best times.

“It is probably one of the toughest 10km races because of the hills. You have to push really hard in the last two miles.

“Up until the last half a mile the three of us were neck and neck and looking across to see how we were all feeling.

“The conditions were fine. It was a little bit wet in places and I wouldn’t have wanted it to be any colder.”

Ellie Gosling, 35, was the fastest female runner and 27th overall with a time of 40 minutes and 29 seconds. The second female home was Daniella Bailey in 42 minutes and 11 seconds and the third was Leanne James 18 seconds later.

Ms Gosling organises running events in Bracknell and won the Henley half marathon in 2014.

She said: “I am training for the London Marathon and wanted to get a benchmark to see where my fitness was at.

“It is always nice to get just under 40 minutes, which I didn’t quite manage, but I was happy to be the fastest female.

“The conditions were perfect. There were hardly any cars on the roads and no rain.

“It is a very well organised race with friendly marshals.”

Jane Davies, from Goring, won the vintage veteran female category after finishing in 45 minutes and 27 seconds.

The retired modern languages teacher has had a busy year of running, competing for the England cross-country team.

She was supported by her husband Phil, who was intending to run but suffered a calf strain five days before the race.

Mrs Davies said: “We do this race every year and we normally do it together. It is a great race and the weather was perfect.

“It is brilliantly organised and everyone is so friendly. We come back every year because we enjoy it so much.”

The event is organised by the Rotary Club of Pangbourne and the number of entries was the highest since it took over in 2016 from Goring and Woodcote Lions Club.

Just over 400 people finished the race.

Event organiser Jerry Wilson, who is treasurer of the Rotary club, said: “It was very successful and the best field we’ve had for many years.

“It helped that we put it back a week, which gave people a breather after Christmas and the New Year, and we had also built a website to take online registrations.

“People enjoy taking part because the event is a bit different — as well as following a beautiful route, it’s pretty much half downhill and half uphill, which keeps it interesting.

“They also feel like it’s a good way to kick off their year.”

About £5,000 was raised and the majority of this will go to Parkinson’s UK.

The rest will be divided between other good causes in the community, including lunches for elderly people.

Donations will also be made to Aquabox, which provides water supplies and filtering devices to humanitarian crises around the world, and Launchpad, a Reading homelessness charity.

Mr Wilson said: “We’ve had a lot of good feedback as participants feel like we’re interested in them and they’re contributing to something worthwhile.”

Goring and Woodcote Lions Club had to stop organising the event due to their dwindling membership.

They ran it for the last time with the Rotary club in 2015.