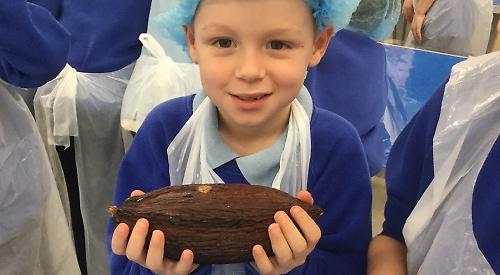 MORE than 100 children at Robert Piggott Infant School in Wargrave took part in a chocolate-making workshop.

They were visited by Rosie Adey, the founder of Rosie’s Chocolate Factory, which is based at Sheeplands Farm in Wargrave.

Pupils from years one, two and three were given a chocolatier masterclass and then made their own chocolate bar and lollipop to take home.

Mrs Adey, who is originally from Henley, started her business four years ago and usually invites groups to Sheeplands Farm to take part in workshops.

The school asked if she would visit the children instead as chocolate is a topic for discussion this term.

Rows of tables were set up in the school hall and the children wore hair nets and aprons as they experimented with flavours.

Mrs Adey said: “The children were very excited but were all well behaved. We divided them into three groups and they each spent an hour with me. We talked about where cocoa pods come from and did some chocolate tasting.

“It is supposed to be an educational workshop. I explained to them that the pods are grown in warm countries and it is important to know that what you see on the shelf in the supermarket has come a long way. I think these kinds of visits are very important.”