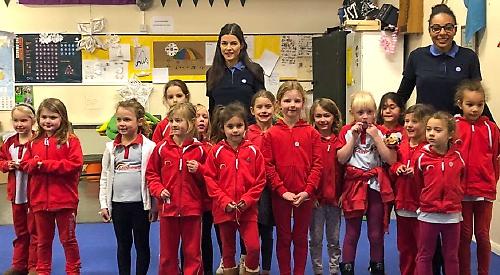 THE Rainbows have returned.

A new unit has started at the scout hut in Baskerville Road, Sonning Common, and has 15 girls who are aged five or six.

The group was established by Hanna Edimoh, of Pages Orchard, following the closure of the Peppard branch in December 2018.

Mrs Edimoh decided to set up the new group so her daughter and other girls in the area would have the opportunity to learn skills and have fun.

She is training to become a Rainbow leader with Tanya Roda, who also lives in the village. Last month they took part in a promise with the girls, where they made an oath to be good Rainbows.

About 30 people, including family and friends, attended the occasion.

Mrs Edimoh said: “Because we are a new unit and both Tanya and I are new to girlguiding, we also had to take the promise, which was quite unusual.

“I promised that I would do my best to serve the Queen and my community, to look after other people and to obey girlguiding law.

“Because the girls are younger they had a much shorter version and only had to say that they would be kind and helpful.”

Mrs Edimoh, whose Rainbow name is Sunshine, said she had received positive feedback about the group from parents and there were 50 girls on the waiting list to join the group, which is open to youngsters living in Sonning Common and nearby.

She said: “We get emails from parents, asking if we have any space for their daughters, but it’s just such a long waiting list.”

Parents can register their daughter with girlguiding via its website, https://bit.ly/2Z4AopT