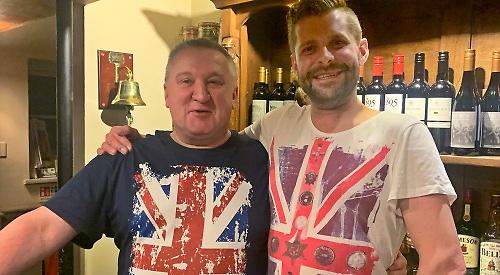 The customers at the Perch and Pike in South Stoke decided to stage the impromptu celebration after discussing the subject over a few drinks.

They were joined by landlord Simon Duffy, whose top showed the flag with the medals of the realm laid over the St George’s Cross.

The drinkers stayed until 11pm on Friday, January 31, which was the exact moment when the withdrawal deal came into effect.

Mr Duffy said: “It was a busy night but there were really just a few of us having an informal party on the spur of the moment. It wasn’t advertised in any way and simply evolved from a conversation we’d been having.

“We realised we were just hours away from a once-in-a-lifetime event and probably wouldn’t see anything like it ever again, so we wanted to make sure we remembered where we were at the time. Considering that it’s such a historic change, the night itself was a bit of a non-event but we thought we’d be a bit cheeky and mark it in our own way.”

Mr Duffy said Brexit had occasionally sparked heated debate among his customers but he hoped people would now put their differences behind them and look to the future.

He wouldn’t say how he voted during the 2016 referendum but said: “If you look at those photos from the evening it should be reasonably obvious — let’s leave it at that.”

He added: “I felt the debate had died down a bit in recent years, though it picked up in the run-up to the general election. People felt that was mostly being fought over Brexit so it was almost a second referendum.

“Some people have taken it quite sensitively but my view is that, unless you’re going to do something radical like leaving the country, we’ve all got to get on with it whether you agreed or disagreed.

“I know the country has been very split over the past few years but it’s happened now and I really hope we’ll embrace it and find a way to ensure it delivers the best for everyone.”