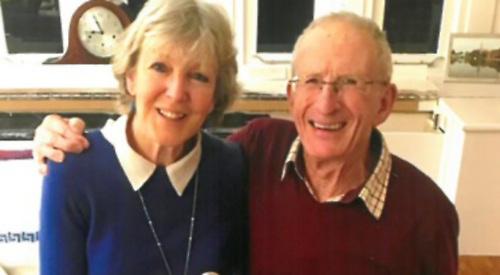 THE Henley and Peppard branch of the Royal British Legion has received an award for achieving the highest increase in membership in Oxfordshire last year.

Branch chairman John Green attended the 95th county conference at Benson parish hall and was presented with the Duncan Trophy and a certificate by David Mason, president of Oxfordshire Royal British Legion.

This is the second consecutive year the branch has been awarded the trophy.

The branch now has 126 members, having recruited 24 people last year while many other branches have been experiencing a decline. In 2018, the membership grew by 12.

Mr Green attributed the success to Mollie Jeffrey, the branch’s membership secretary, and the social offering of its monthly meetings.

He said: “Mollie’s dedication and hard work has been largely responsible for this achievement against the national trend.”

Up to 50 members meet at the Christ Church Centre in Reading Road, Henley, on the third Monday of the month at 11.30am.

The gatherings always include a guest speaker and a cooked meal, with a glass of wine plus coffee. A ticket for the lunch costs £12.

Before moving to its current home, the branch would usually see only about 15 people at meetings.

Mrs Jeffrey, who lives in Harpsden and joined the branch in 2016, said she was delighted with the award. She added: “My role is to try to raise the profile of the branch, so I’m very happy, but it is a team effort to raise awareness and encourage people to join.

“You don’t have to have a military background to attend the meetings but I think it is important to support the armed forces.

“The guest speaker is sometimes military based and you see some familiar faces and can have a chat and some lunch.

“People are so nice and interesting and I really enjoy their company. It is very informal and friendly. I would like to attract younger members — the meeting is on a Monday morning, so our membership tends to be retired people.”

Norman Topsom, who lives in Henley and was the stationmaster at Twyford until his retirement in 2015, will speak at the branch’s next meeting on March 16.

The branch is organising an event on the eve of the 75th anniversary of VE Day on May 7 called An Evening with Rudyard Kipling.

It will be held in the riverside suites of the Red Lion Hotel in Hart Street, Henley, starting at 6.30pm.

Journalist and orator Philip Geddes will tell the story of the award-winning storyteller’s life with readings from his poetry.

There will be a seated buffet dinner and a welcome drink.

The cost is £30 and all proceeds will be donated to the Legion’s Poppy Appeal.

• In May Mrs Jeffrey completed a skydive, which raised £3,500 for the Legion and in November, Mr Green climbed the second highest mountain in Ethiopia and raised nearly £2,000.