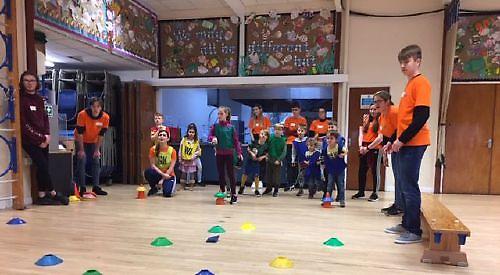 The 10 trainees, aged 15 to 21, are now qualified to organise events and activities for children.

Active Leaders, which was set up by villager Penny Snowden in 2016, trains young people and university students in basic first aid, safeguarding and how to be motivational and organised when leading activities. They can then include the skills on their CVs when applying for jobs.

Last week’s course, which was supported by Go Active South Oxfordshire, was led by athletics coach Conrad Rowland, from Slough. They were taught first aid by two trainee paramedics from Oxford Brookes University.

On one day, the participants helped run a navigation challenge for children in the field behind Kidmore End war memorial hall in Reades Lane organised by South Oxfordshire District Council.

They served as car parking attendants and registered people as they arrived. About 45 children took part.

At the end of the course they each received a certificate and they will also be able to obtain a reference when seeking employment.

Amanda Watkins-Cooke, 40, from Sonning Common, who helps run the programme, said: “They were a fantastic group of people and all of them are going to come and work for us at some stage.

“They were all so positive at the end. They said what a difference it made to them. They were the most motivated and personable group we have ever had the fortune to work with. They were brilliant and really receptive — a great bunch of people.”

Trainee Megan Wigmore said: “I had so much fun doing the course and would love to do it again. Thanks to everyone who made it so special.”

The newly trained leaders will now be invited to run activities at village fun days at Easter and during the summer holidays.

“I was quite emotional when the students were giving us feedback because I had not realised the impact that this would have on them. It was really humbling.

“They were a really interesting and engaging group of students. Without exception, they all excelled in a number of areas.

“They had to learn to think on their feet, adapt and problem solve and they had planned out all the different roles they might need.”

Almost 1,000 people have been trained as Active Leaders since the scheme was established.