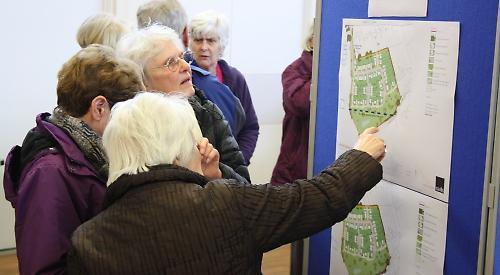 THE car park at the Johnson Matthey Technology Centre in Sonning Common has been deemed suitable for 20 new homes.

The 0.7-hectare site off Widmore Lane has been recommended for development by the village’s neighbourhood plan revision working party to meet housing targets.

The group has been tasked with updating the plan, which passed a referendum in 2016 and allocated five sites for 195 homes.

The revision should ensure the document is in line with housing demand and protect the village from speculative development by defining how many houses can be built in any particular area.

Sonning Common was required to find about another 100 homes in the local plan produced by South Oxfordshire District Council, the planning authority.

The working party considered a total of 11 sites for possible development and decided that the Johnson Matthey car park was the most suitable.

This was because of its existing use as a car park and its enclosed nature and because it was the preferred choice of residents who responded to surveys.

Development of the other 10 was deemed unnecessary because the remaining housing allocation could be achieved by Maiden Erlegh Chiltern Edge School’s proposal for a
50-home development on land off Reades Lane that it owns and 40 extra care flats that could be built off Bird Wood Court, where the Kennylands gym is located.

The school’s land was classified as a reserve site in the original neighbourhood plan and allocated 37 homes.

The gym land was allocated 14 homes in the original plan and the working party is now negotiating with the landowner about the larger development.

This would have to include a new gym, which the working party has suggested could be built in the field behind Kidmore End War Memorial Hall in Reades Lane.

The working party exhibited its proposals at the village hall on Saturday. About 230 people, including Henley MP John Howell, attended.

He said: “The purpose was really to present our proposals for how we’re going to meet our housing allocation. This was the stage we told the village what we think.”

He said that even though the Johnson Matthey site was located in the Chilterns Area of Outstanding Natural Beauty, it was already a car park so a housing development would not be as harmful to the area. Cllr Fort said: “We feel that to move from a car park to housing is a lot less contentious than moving from open field to housing.

“We have had quite a few meetings with Johnson Matthey. They have investigated a scheme for small houses, which is what we’re keen on.

“None of it is binding, of course. We’re prepared to accept a scheme for 50 houses at Chiltern Edge School even though the original allocation was for 37 houses.”

He said the gym site could be redeveloped to provide residential accommodation for the elderly.

“The challenging thing with that site is under a district council covenant it can only be developed if a comparable facility is provided somewhere else,” he said.

“If we didn’t get a deal we would have to think again.”

Cllr Fort said he was hopeful that any more homes that were required would be achieved by more “infill” developments.

He said: “For the last seven years the continuing rate of infill in the village has been about 10 new homes per year.”

It was important to revise the plan to ensure it retained its authority.

Cllr Fort said: “It’s necessary because under the government rules if we don’t revise it, it gradually loses its statutory weight.

“This is why we are anxious to do this sooner rather than later because that will put us in a good position.”

The working party will now begin rewriting the neighbourhood plan, which must then be approved by the district council and planning inspectorate.

Cllr Fort said Mr Howell had told him that the revised plan was unlikely to require a referendum because the original plan had not been changed significantly.

He added: “We have been at this for about two years. What is pleasing about it is it’s a huge amount of very, very detailed work.

“A lot of people in this village do care — not all of them, but a significant proportion — and feel a genuine investment in the neighbourhood plan and what has been done.

“On the whole most people are genuinely and generally appreciative. Some have particular complaints and observations but the general feeling is positive and supportive.”