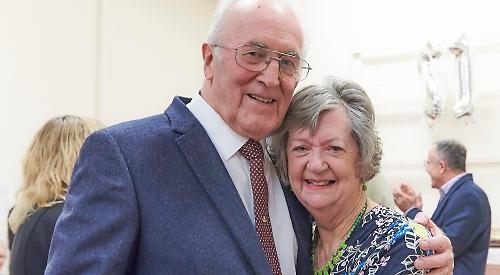 AN 84-year-old celebrated his 21st birthday on Saturday.

He usually marks his birthday on February 28 each year but every four years he celebrates his real one and this time he was treated to a surprise party organised by his 77-year-old wife Chrissie, a former parish councillor.

Sixty people, including family, friends and neighbours, attended the event at the village hall.

Mr Godfrey’s daughter and grandchildren from his previous marriage were present as well as former colleagues from the RAF and flight training school Enstone Aerodrome, near Chipping Norton.

To surprise him, Mrs Godfrey had told her husband that they were going for dinner at the Butcher’s Arms pub with family. She asked him to wear a smart suit as a photographer would be there to take pictures.

However, when the couple arrived at the hall Mr Godfrey became suspicious. The lights inside had been dimmed but were switched on once the couple entered and the guests sang “Happy Birthday” and cheered.

Mr Godfrey said: “I had a feeling something was happening when we arrived at the hall. I said ‘what are we doing?’ and started to smell a rat.

“I’ve never been so surprised in all my life — it was marvellous. It knocked me off my feet. When I walked through the door I saw relatives, friends and RAF buddies — people I’ve known for the last 20 or 30 years. It was really quite amazing. ”

The hall had been decorated with balloons and pictures of Mr Godfrey as a child.

The couple and their guests were served canapés and champagne before a jacket potato supper and apple crumble, which had been prepared by villager and friend Sandy Orifino. Mrs Godfrey had hired two waiters who doubled as singers and gave a rendition of Delilah by Tom Jones and sang Queen and Roy Orbison songs as the couple danced together.

She had told guests not to bring presents but her husband’s brother-in-law presented them with chocolates and a title related to land in the Scottish borders.

She said: “We’re the new Lord and Lady Godfrey of somewhere in Dumfries.”

Mr Godfrey said: “I feel quite emotional that my wife had done this for me. I didn’t realise she had been planning it. She had got in touch with a lot of my old friends and buddies.

“My first wife’s brother was there with his wife. He stood up and did a speech and he talked about his memories of me when he first met me when he was 15.

“My daughter’s husband Mark stood up and told everybody what he thought of me. He said after the passing of my first wife they were all absolutely amazed and thrilled to bits when I remarried because we had both lost our partners and just seemed to connect.”

Mrs Godfrey said: “I managed to keep it a surprise from him but I’ve never told so many lies in all my life. He kept asking me things and I would say, ‘Oh well, we’re just going to the pub’ and then he overheard me booking a taxi and asked me ‘why are you booking a taxi to the village hall?’

“It was endless. I got myself in a terrible muddle and said, ‘do you think you can just not ask me any more questions?’ but he knew something was going on.

“Everyone was in on the secret and was really good. I told them if they wanted to wish him a happy birthday on the phone to say, ‘hope you have a happy day and see you some time’. Some of them loved it and said they did not know when they were going to see him again.

“Usually we just have a normal birthday like other people, but I wanted it to be special. He got loads of cards with those badges that say ‘now you’re 21’ and ‘birthday boy’. It was tremendous fun.”