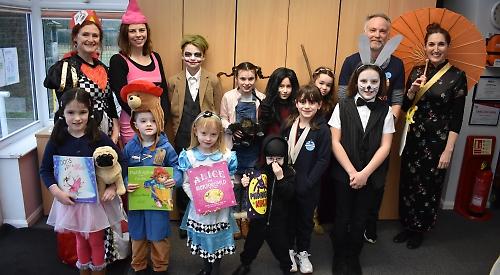 THE Joker and Draco Malfoy were among costumes worn by pupils at Stoke Row Primary School to mark World Book Day.

Noah Akers, 10, came as the fictional villain from the Batman comics while Noah Westallrease, 10, and Lilia Taylor, 10, dressed as the pupil from the Harry Potter series.

Ottilie Jenkins, eight, dressed as a witch from Roald Dahl’s The Witches while Eve Chater, 10, dressed as Pansy Parkinson, also from Harry Potter.

The pupils listened to Nick Poulton, whose nine-year-old son Casper attends the school, talk about his children’s book Podwitch.

He also led a workshop about descriptive writing where the children imagined travelling to a different world through a portal before describing what they saw.

Teacher Ellie Siv, who dressed as a crayon from The Day the Crayons Quit by Oliver Jeffers and Drew Daywalt, said all the children had been looking forward to dressing up.

She said: “I think it’s excellent because it helps promote reading and it’s a very enjoyable day. We do lots of activities like sharing our favourite books, making book marks and writing stories.”