Singers call off meetings due to fears over virus 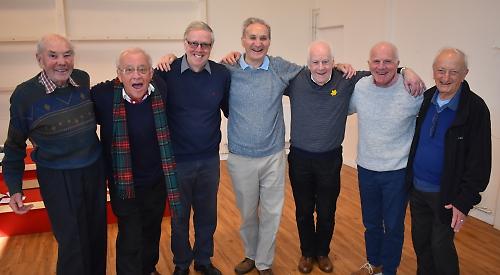 A SINGING group in Sonning Common has celebrated its 10th anniversary despite fears about the spread of the coronavirus.

However, Nottakwire has cancelled its meetings for the foreseeable future due to the potential threat of covid-19 to its members, many of whom are elderly.

About 60 members gathered at the village hall in Wood Lane on Friday for an anniversary party.

They were only allowed inside after they had applied hand sanitiser and then had to use it again before they ate the cakes and refreshments on offer.

About 10 members did not show up because they were concerned about contracting the virus.

The singers sang Can You Feel the Love Tonight from The Lion King and Who Will Buy? from Oliver!, among others.

Mrs Moola, 77, said: “We’ve had a very difficult time over the last couple of days because of the virus.

“Quite a few of our more elderly members were affected by the death of the patient at the Royal Berkshire Hospital.” She said that most members of the group, which normally meets every fortnight, still wanted the celebration to go ahead.

Mrs Moola said: “It’s a great group and everybody is so friendly and supportive. They’re lovely and have made real friendships with each other. We have a lovely time together.

“It’s as much about the camaraderie and friendship as it is about the music. It’s a very good outlet for people’s feelings and emotions.  Many have gone through a serious illness or losing their partner. New people come in and sit in floods of tears because it’s a release of everything. Music is a wonderful conduit for giving people an emotional release. All these things are the reason it continues.

“The last 10 years have been hard work but very, very rewarding because so many people’s health and breathing have improved, particularly people who have conditions like asthma.

“We’ve had quite a lot of reports from people who have been to their annual test at the doctor and their scores have improved. It illustrates the power of song.”

Mrs Moola added: “Unfortunately, we have had to make the decision to stop sessions for the foreseeable future as we cannot compromise the health of the members.

“The majority are in the ‘at risk’ category but when it's safe to resume, we will be meeting as before.

“I don’t think we can keep going for another 10 years but we would like to continue for as long as we possibly can.

“At some stage we need to think about whether we can find somebody else we can pass this on to.”

Since it began, Nottakwire has raised more than £23,500 for charities and good causes with the money coming from its two concerts every year and members’ donations.

However, the concerts no longer take place due to the pressure on the singers.

In December, the group donated £200 to Sonning Common magazine and £150 each to the village youth club and the Friends of Sonning Common Library following a carol concert.