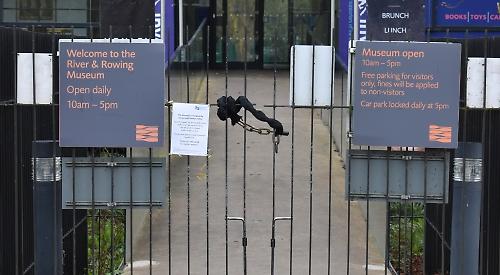 CORONAVIRUS is taking its toll on Henley.

Venues including the River & Rowing Museum, the Kenton Theatre and the Regal Picturehouse have all closed, sporting fixtures have been cancelled and retailers have reported a huge drop in footfall.

Dozens of events that were due to take place over the next few weeks have also been postponed or cancelled in an attempt to minimise the risk of infection.

The country’s death toll from the pandemic stands at 71 and a total of 1,950 people have tested positive for the virus, including 25 in Oxfordshire, but the actual number of cases it estimated to be more than 55,000.

Panic buying has continued, despite pleas from supermarkets, with many supermarket shelves bare of long-life goods and hygiene products.

Prime Minister Boris Johnson has advised that everyone in the UK should avoid “non-essential” travel and contact with others. He said people should work from home and avoid arge gatherings.

Those most at-risk are pregnant women, people over the age of 70 and those with certain health conditions and they will be asked to stay home for 12 weeks.

The River & Rowing Museum in Mill Meadows closed on Tuesday until further notice as a “precautionary measure”.

The Regal Picturehouse in Boroma Way closed on Wednesday, along with 24 sister cinemas across the country, until further notice.

On Monday the Kenton Theatre in New Street cancelled all its shows until the end of April and the Mill at Sonning theatre closed.

The National Trust, which manages Nuffield Place and Greys Court, says its houses, shops and cafés will all be closed by today (Friday). However, it will, where possible, open as many of its gardens and parks to visitors free.

The fourth biennial Gap Festival in Goring, which was due to take place between June 12 and 21, has been cancelled.

The sporting calendar has been all but wiped out because of the virus.

The RFU has suspended all rugby activity in England, until April 14 which affects the next three Henley Hawks’ matches.

Chris Baker, president of Henley Hockey Club, said all hockey had been suspended and it had postponed its end of season dinner dance on April 5 until July 24

Trevor Howell, chairman of AFC Henley, said that all club matches, training and extra-curricular coaching sessions had been suspended until further notice.

Paul Trimmings, manager of Henley Town FC, said: “It’s financially crippling for us to be honest. We could go bust over this.”

British Rowing restricted any external visitors, including the media, to Caversham Lakes for the final Olympics trials at the weekend.

He said: “You’d expect the regatta to be taking all options very seriously but we’re still in March and the regatta is at the beginning of July.”

The Henley College’s production of Equus, which was due to take place this week, was cancelled.

The Henley & District Agricultural Association cancelled its annual meeting, which was due to be held on Monday.

Peppard Parish Council has cancelled its annual meeting on April 4.

Chiltern Edge Horticultural Society has cancelled its spring show, which was due to be held at Sonning Common village hall the same day.

Other scheduled meetings will only take place where matters cannot either be deferred or dealt with under delegated authority.

The second Greener Henley festival, which was due to take place on May 16 in Market Place, has been postponed until September 5.

The Reading Half Marathon, which was due to be held on April 5, has also been cancelled.

Be Well sessions, which offer healing therapies at King’s Arms Barn in Henley on Mondays, have been cancelled until the end of this month.

The Bell Surgery’s patient talk on cancer awareness on April 29 will be re-arranged for later in the year.

The Henley Literary Festival event with Anna Whitehouse and Matt Farquharson (Mother & Papa Pukka) and Giovanna Fletcher, which was due to take place on Tuesday, have been moved to September 30 and October 2 respectively.

A community tea hosted by the 1st Shiplake beavers, cubs and scouts at the Memorial Hall in Shiplake on March 29 has been postponed.

Wyfold Riding for the Disabled, a charity based in Kingwood, has postponed its 50th anniversary celebration and awards evening. This was scheduled to take place at Phyllis Court Club in Henley on Saturday, March 28 but will now be held on Saturday, October 10.

Thursday afternoon community teas at Whitchurch village hall have been suspended because of the coronavirus outbreak.

Goring Gap Players’ performance of the Ealing comedy The Titfield Thunderbolt, which was running from Wednesday until tomorrow (Saturday), has also been postponed.

Pangbourne Choral Society postponed its Brahms Requiem concert tomorrow and hopes to reschedule it for later in the year.

Most of South Oxfordshire District Council’s services including bin collections are running as normal but all meetings are postponed until the end of March.

Staff are still on hand to answer queries about issues such as council tax, planning and housing and its business team is offering advice to traders who fear the outbreak will affect trade.

Oxfordshire County Council said some libraries might need to change their opening hours at short notice.

A full report will be published in this week’s Henley Standard, out on Friday.