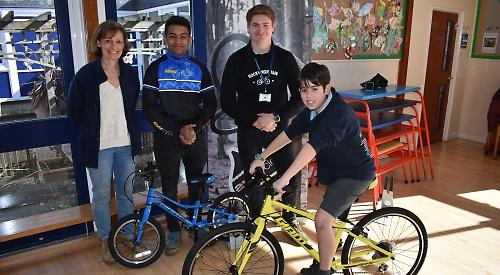 A PUPIL at Sonning Common Primary School won a Giant ARX bicycle in this year’s On Your Bike prize draw.

Bruno Penabad Gallord, 11, was presented with the machine during a special assembly at the school run by Penny Snowden, who founded the annual event.

More than 150 children were present and watched Mrs Snowden select the year 6 pupil’s name from a pile inside a container.

They cheered and applauded when she read out Bruno’s name and he went to collect his prize from Rob Bowen, of AW Cycles in Caversham, which sponsors the event and donated the bicycle.

Bruno, who has taken part in On Your Bike three times, said: “It’s really fun.”

This year’s On Your Bike, the 14th, was due to take place on Sunday but was cancelled due to the coronavirus outbreak. The number of entries was already down on previous years for the same reason.