Applause shows no sign of waning after five weeks 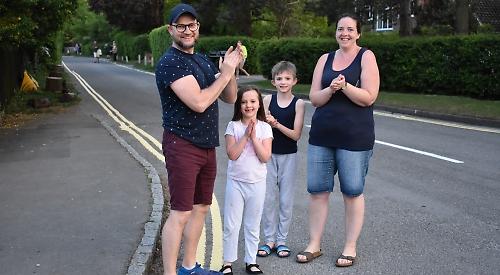 RESIDENTS of Shiplake joined millions of people nationwide in the fifth applause for NHS staff and carers battling the coronavirus pandemic.

The Clap for our Carers tribute to doctors, nurses and other key workers took place at 8pm on Thursday last week and will continue at the same time every week until the crisis ends.

Kevin and Kate Hannah stood outside their pub, the Baskerville, in Station Road and applauded with their children, Charlie, nine, and Esme, five.

Mr Hannah, the landlord, said the family had taken part every week and were glad to do it again. He said: “The first time was really emotional. You could hear it across each street. It’s all about community spirit and really uplifting. Everybody is going through a tough time.”

His wife added: “I think they’re heroes. They’re risking their lives and the lives of their families to save ours.”

Charlie said: “We’re clapping for the NHS for risking their lives for others.”

Michael Lines, 64, was joined by his wife Susan, 66, outside their home in Northfield Avenue. They have also taken part in the applause each week and will continue until the crisis abates.

Mr Lines said: “We normally go out with our saucepans but we weren’t organised. The noise has been really good. People have been out every time.”

His wife added: “We’re not just doing this for the NHS but for all key workers. It’s a very simple way of saying ‘thank you’.”

The couple have been trying not to go out otherwise. The only time Mr Lines leaves the house is when he goes shopping for the pair or his mother Mary, 91, who lives in Ashtead, Surrey, and does not leave her home. Mr Lines said: “Sue hasn’t been out beyond the front gate for the last four weeks. She’s quite scared about coming into contact with anybody.”

He praised the health workers for their hard work in the crisis.

“They’re doing a phenomenal job,” said Mr Lines. “I think they appreciate the outpouring of goodwill from everybody.

“I hope the Government will take note of it and there’s a reorganisation of who gets what and we start paying health professionals, teachers and other key workers properly.”