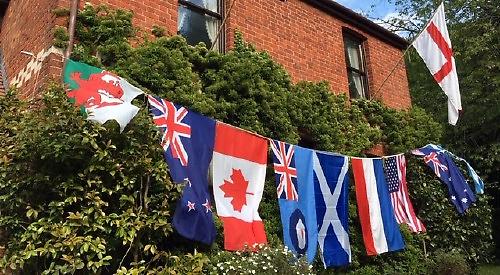 ABOUT 80 people in Shiplake celebrated the 75th anniversary of VE Day by holding a street party.

Residents of New Road and Crowsley Road gathered on the grass verges and driveways outside their homes and were careful to social distance due to the coronavirus outbreak.

They enjoyed tea and cakes and chatted to each other about how they are coping during the lockdown. Some drank Pimm’s or wine while others enjoyed scones and told stories about their relatives’ wartime exploits.

New Road was decorated with Union flag bunting and signs that said “Thank you” and “Victory and lasting peace in Europe”.

The celebration lasted for an hour, in keeping with the then rules about exercising, and ended when villager John Barbour, a Scot, played the bagpipes in the middle of the New Road and Crowsley Road crossroads.

Ray Wild, who lives in New Road with his wife Carol, said: “It was rather splendid. It was possible to walk around while maintaining a social distance and it provided an opportunity for people to get together in a way that has not been possible for a significant amount of time. A few of us returned in the evening to hear the Queen’s Speech.”

Organiser Micky Denehy, 60, who lives in New Road with his wife Vicky, 60, and their children Yasmin, 24, and Sam, 23, said: “The main party was in New Road and about 30 or 40 households took part. People were dressed up and brought out their old-fashioned tea trollies. There was also a fair amount of alcohol and there was lots of laughter and smiles on people’s faces.

“A few people walked up and down the road to say ‘hello’ to neighbours. The atmosphere was one of absolute relief that people still existed, particularly for those who are vulnerable and probably hadn’t seen anyone other than someone delivering their groceries. There were quite a few vulnerable people who sat in their drives who said it was the best day of the lockdown for them, which was lovely.”

Mr Denehy wore his grandfather’s medals for the occasion and spoke about his role in both world wars. Captain Francis Denehy served in the 32nd Lancers in Mesopotamia during the First World War and was awarded the Military Cross for outstanding bravery.

He was mentioned in despatches twice and the first was signed by Winston Churchill, who was Secretary of State for War at the time. In the Second World War, Capt Denehy served in the 13th Lancers but was captured by the Germans in Greece and spent the last four years of the war as a prisoner.

Mr Denehy said: “His Second World War was an absolutely miserable experience, not least because he was a significantly older soldier.”

Elsewhere, the chairman of the Henley and Peppard branch of the Royal British Legion paid tribute to the wartime generation at his home in Maidensgrove. John Green decorated the house with the flags of the Allies, including the Union flag, the St George’s Cross, the Welsh flag, the Saltire, the Royal Air Force flag and the flags of New Zealand, Canada, the Netherlands, Australia, Greece and the USA.

He also fixed a deactivated Lee-Enfield rifle into the ground with a bayonet and placed a “Tommy’s” helmet on top of it as a mark of respect for soldiers who lost their lives in the conflict.

Mr Green, who lives with his wife Elizabeth, said: “I observed the silence at 11am for two minutes and raised a glass at 3pm in the afternoon. The idea of the upturned rifle was to remember for a moment all those who weren’t around to celebrate VE Day and those serving in the Far East, often known as the ‘Forgotten Army’.

“We all had to adapt our celebrations because of the current circumstances and from the Legion’s point of view, we’re hoping that when VJ Day comes along in August we can celebrate in a proper manner.”