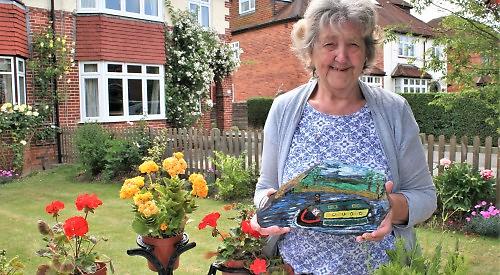 SIX households in Caversham entertained their neighbours by staging an alternative Chelsea Flower Show in their front gardens.

Over the bank holiday weekend, the Hemdean Road residents displayed a range of floral art and craftwork inspired by the Royal Horticultural Society’s annual event, which this year was held online only due to the coronavirus outbreak.

Many families and passers-by stopped to look at them and take photos with their phones.

Organiser Hester Casey and her partner Mike Lelliott put out a female scarecrow which the couple use for the art installations that they often set up by their front gate.

They dressed her in a straw hat and summery floral dress sitting on a chair with a basket of homegrown geraniums. Next to her was a table set out with afternoon tea made from assorted flowers.

The display also included a stone cat eating flowers from a bowl and a tribute to Nigel, a golden retriever belonging to Gardeners’ World presenter Monty Don, who was a regular fixture on the show until his recent death.

Each participant was presented with a gold certificate signed by “Monty Fun”.

Ms Casey, who had bought tickets for Chelsea, came up with the idea a few weeks ago when her neighbour Christine Marsh was looking to dispose of an old toilet bowl but couldn’t because the municipal tips were closed.

She suggested filling it with flowers and things took off from there.

Ms Casey, a retired civil servant and a member of the management committee of Caversham Court Gardens, made her scarecrow for an event six years ago.

She said: “I’ve always been a keen gardener and found creative projects the perfect antidote to office life.

“It cheers you up and gives you an outlet — I feel quite miserable if I can’t create things.

“The neighbours exceeded all expectations. They were very enthusiastic when I suggested it and they were very resourceful as I asked them to only use what they already had and not buy anything specially. It was lovely to put a smile on people’s faces as they went past. One lady said she’d been feeling down about being unable to do anything on a lovely bank holiday weekend and this really cheered her up.

“It was also a nice way to bring my neighbours together and give us something to talk about other than the coronavirus.

“I’m not like one of these Italians who can sing from their balconies so this was a way of using my talents to help others.”

Ms Marsh, who lives with her children Joshua, 17, and Alexander, 14, themed her display around bathrooms. It included the toilet “planter” and potted herbs like lemon balm, which could be used as an air freshener, and mint to represent toothpaste.

She said: “It was a daunting task at first but I got into it once I had my theme. I was able to scrounge all the bits and bobs I needed from the garden or the garage.

“We had loads of people stopping to look and it’s nice to think we brightened up their day.”

Catherine Crabb, who lives with her husband Paul, put out an arrangement of potted geraniums and hand-painted and knitted goods themed around her passion for canals and hedgehogs.

She said: “People have been really fascinated but I tell them, ‘Anyone can paint — all you need is to pick up a brush and look around you’. I really enjoyed putting it together.”

Jill Knight, a keen knitter, created a display called Flower Power featuring pansies and other flowers arranged in the shape of a bicycle festooned with butterflies and bees.

This went next to an arrangement of stuffed creatures having a picnic, which she started building over Easter to entertain local children and periodically adds to.

She and her mother Pooja “planted” them in baskets and decorated an old Ikea furniture box to look like a wrought iron gate.

Maya, who lives with her mother, father Brian and brother Aiden, four, said: “I like doing art because it’s really good fun but we made so many flowers that my fingers started to hurt after a while.”

Mrs Fernades said: “She’s always done origami as a hobby and knows a lot more than I do. She taught me a lot because there are so many folds that you have to remember.

“It was really well received, which makes it all worthwhile as Maya had home school during the week and we crammed all our effort into the two days before the weekend.”

Peter Bowden and his partner Norma Green created a scarecrow called Lockdown Larry using rags, bags, a spade and his boiler suit. They dressed him in a protective mask and wrapped him in a heavy lock.

He was posed next to a wheelbarrow full of tomato plants which the couple expect to sell for a charity.

Mr Bowden said: “This was a good way to make people smile and get some community spirit going. It all came together really well.”

Last month Ms Casey and Mr Lelliott erected a memorial to every victim of the covid-19 pandemic in their garden, which they regularly updated with the global death toll.