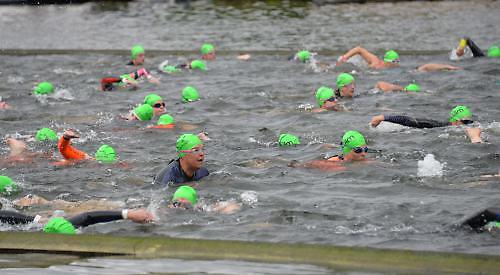 SWIMMERS have expressed their disappointment with Henley Swim’s refund policy after it cancelled another event due to the coronavirus pandemic.

The Thames Marathon, a 14km swim from Henley to Marlow, had been due to take place on August 16.

The Henley Classic on June 28 had already been called off, while the Club to Pub swim on July 25 and the Outdoor Swimmer Henley Swim Festival on July 12 have been rescheduled to August 28 and 29.

Swimmers took to social media to voice their anger after being told they would only receive 50 per cent of their £120 entry fee.

They were also told they could put the money towards next year’s event.

John Bliss wrote: “The options you have provided are a disgrace. You’ve had five months’ notice that this won’t go ahead. £120 is 20 lake swims.

“Not everyone is affluent and able to freely fund you. You should make the 50 per cent optional for those that can afford it.”

Roderic Yapp said: “I understand the event can’t be run safely, so I think it’s the right call, but the refund policy is ridiculous. Could you have not expanded the 2021 swim and given everyone a pass for next year?”

Mark Toulson wrote: “Surely we are entitled to a full refund as consumers, or a deferment in full to the 2021 event?”

Jack Claridge said: “Gutted about this but really not happy about only offering 50 per cent back on the next year’s event. I understand there are overheads to pay but this really is shameful. I’ve entered other triathlon events, which have just been deferred to the following year.”

Eric Macgurk said: “This is the only event I’ve entered where they haven’t either deferred to next year in full or offered a refund, I think it’s disgusting. We’re all struggling out there but there’s no need to take our money and run.”

Other people were more sympathetic.

Malcolm Burfitt said: “This is run by a small company who have to make all of their income from only four events. Not all of your entry fee is profit, nor is it used for infrastructure and supplies on the day.

“It’s understandable people want as much money back as possible, but if you want the company to be able to continue and to have the events next year, you have to accept that an amount of the entry fee is essential for it to continue to trade.”

Sophie Allen wrote: “These are the strangest of times and a lot of people simply fail to understand and appreciate the cost of running amazing events comes long before the event itself. I want to swim next year, so I’m happy to take the credit note.”

Jeremy Laming,
co-founder of Henley Swim, said: “Under the current social distancing rules, we did not believe we could guarantee the safety of our swimmers, volunteers and crew with respect to covid-19 due to the nature of this event.

“We have had tremendous support from a large proportion of our swimmers, both through social media and direct contact, but naturally some are disappointed not to have been offered a 100 per cent refund or full deferral.

“Swimmers may not realise that a significant amount of their entry fee is pre-spent on deposits and purchases with long lead times and on the overheads of running the business throughout the year.

“It is stated in our terms and conditions that we do not carry event cancellation insurance and that there is no refund payable in the event of cancellation due to circumstances beyond our control. However, as cancellation has taken place several weeks before the scheduled event, we have been able to offer a refund.”

More than 850 swimmers took part in the ninth annual event last summer, setting off from Leander Club in waves.