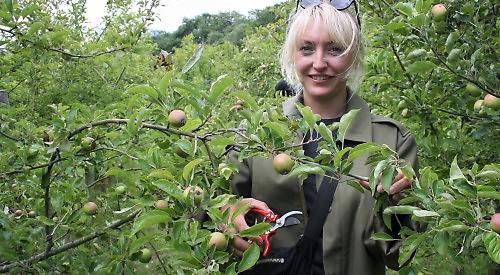 SIX hairdressers swapped their scissors for shears when they helped to thin out almost 250 fruit trees at a Henley orchard.

The team from Radio Hair Salon, a small chain based in London, spent all of Monday working at Three Oaks, off Greys Road.

They were invited by Nick Hay, who runs the orchard with his wife Banny and is an old friend of salon chain owner Corrade Tevere.

Mr Tevere’s staff have been furloughed since the coronavirus lockdown was announced on March 23 so they were happy to spend a day in the countryside.

They stripped excess apples, pears, plums and quince from the trees using hand tools to ensure that the remaining specimens will grow to a good size. If this isn’t done every year, each tree will yield an excessive number of under-sized fruit and may even bear none the year after that.

Mr Hay, who usually does the job by himself, asked the team to help because he thought their skills would stand them in good stead.

Participants came from as far as Spain, Germany and Italy. Mr Hay, of St Mark’s Road, Henley, said: “You need to work quickly, have a good eye for detail and a strong wrist — things they were all bound to have.

“I was very impressed with how quickly they worked — they absolutely ripped through it and did a very thorough job in the process, following my instructions to the letter.

“There has been a lot of talk about going ‘back to the land’ while the lockdown’s still in effect for some industries and I suppose this was our contribution towards that.”

Marie France, one of the participants, said: “It’s so nice to be out among nature, though it’s strange to hear nothing except rustling in the trees.

“We haven’t worked for four months so it’s nice to have something to do and enjoy the odd burst of sunshine.”