Happy 100th birthday to a ‘legend’ 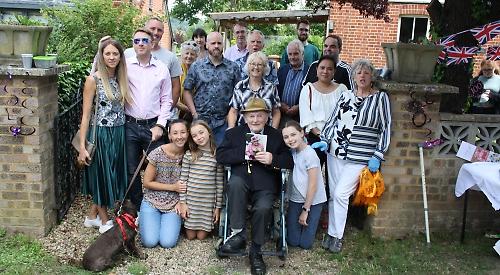 A MAN from Henley sang with his family and friends to celebrate his 100th birthday.

David Beck was joined by about 100 people outside his home in Belle Vue Road to mark the occasion on Sunday.

They included neighbours and members of the congregation at St Margaret’s Church in Harpsden, which he attends.

About 20 relatives helped set up Union flag bunting in Mr Beck’s front garden and tables to display his old photographs.

They had bought him an iced birthday cake decorated with a Welsh dragon, rugby ball and cricket stumps.

The words “Dave is a legend” and “100 not out” were inscribed in white icing.

Birthday cards were hung across the front wall of his garden like decorations.

The wellwishers began to arrive from 11am and chatted outside in the road until Mr Beck came out of his home to a round of applause half an hour later.

Dressed in a double-breasted jacket and trilby, he walked along his driveway using his walker to cheers.

Mr Beck thanked everyone for turning up and encouraged them to sing We’ll Meet Again by Dame Vera Lynn.

The audience obliged and then sang Run, Rabbit, Run!, Pack Up Your Troubles in Your Old Kit-Bag, Cwm Rhondda (Bread of Heaven) and It’s a Long Way to Tipperary, among other songs.

Mr Beck’s nephew Colin Varndell, from Dorset, read a speech on his behalf.

He said David and his twin sister Dora were born on July 5, 1920 and lived at Hurley with their parents, Lily and Louis, and sisters Amy and Lillian.

The family had moved from Tiger Bay, an area of Cardiff.

When David was five they moved to Henley and lived in Northfield End.

Dave left school at 14 and became an apprentice fitter and turner with engineering company Stuart Turner. A year later the family moved to St Mark’s Road.

Dave, a keen boxer, met his future wife Joan through work and they were married in December 1944.

During Second World War he served in the Home Guard and later in the RAF Medical Corps.

The couple took over as licensees of the former Rose and Crown pub in New Street, Henley, in 1953.

The pub became the family home for the next 27 years as they brought up their children, Pam, Ken and Clive.

Many celebrities, including actresses Diana Dors and Ingrid Pitt, visited the pub because it was near the Kenton Theatre. When singer David Essex visited he was playing a small part in a musical at the theatre and needed some accommodation.

Mr Beck offered him a room and the pair became friends.

Mr Varndell said: “On winter nights, Dave and the young David sat round the fire singing.”

The landlord would say that David Essex “couldn’t sing half as well as I could”.

After leaving the pub in 1980, Mr and Mrs Beck moved to Belle Vue Road.

He became head gardener and estate manager for Beatrice Lily at Peelfolds in Henley and met Lady Pamela Hicks, the Queen’s cousin, with whom he struck up a friendship.

Mr Varndell thanked Mr Beck for everything he had done for the family.

He said: “Uncle Dave, your straightforwardness, your dignity, your family values and your generosity of spirit have been an inspiration to us all. Thank you.”

Everyone applauded and Mr Varndell embraced his uncle.

Members of the family then handed out lyric sheets to the audience to join in the next number, called Dave Beck’s Song.

It was sung to the tune of Bread of Heaven and included the words:

Dave Beck he is a legend.
Loved by all who know him.
He is funny, kind and special.
He always has a tale to tell.

They also sang Happy Birthday and the National Anthem before many people went to congratulate Mr Beck while the cake was cut.

The family served Prosecco and cake while Mr Beck posed for photographs with his card from the Queen which had a message reading: “I am so pleased to know that you are celebrating your one hundredth birthday on 5th July 2020. I send my congratulations and best wishes to you on such a special occasion.”

Mr Beck said he was humbled that so many people, including about 20 members of his family, had travelled to see him.

He said: “It’s wonderful to see everyone. I have lost so many friends throughout the years on account of my age.

“It’s great my family are here and it’s just wonderful. We’re a happy family and we all thank God for what we have.”

His son Clive, 65, from Surrey, said: “We’re so incredibly proud of him. It’s really emotional for us just to see how well loved he is. There are a lot of people here that I did not recognise.

“We’re going to do the same thing next year. It’s just such a tremendous achievement for Dad. He deserves everything he gets.

“He’s still sharp and when you speak to him his memory is superb.”

Son Ken, 70, who lives in Caversham with his wife Pauline, 69, said: “It was very important for dad to celebrate because he’s a social person.

“It’s a real testament to him that so many people are here. He’s all about people, not material things. He enjoys people’s company and he loved it.”

Daughter Pam, 74, who lives in Peppard Road, Caversham, said: “It was fantastic and lovely to see people enjoy themselves.”

Mr Beck, whose wife died 17 years ago, did not want any presents and asked people to donate to the NHS instead via a JustGiving page.

To make a donation, visit https://bit.ly/3gstr9y