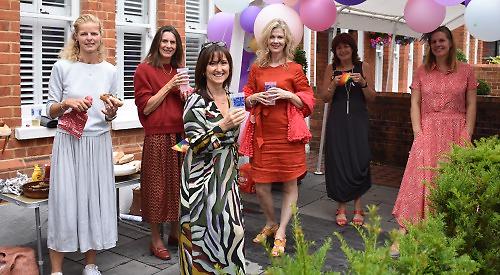 NEIGHBOURS celebrated Henley Royal Regatta by holding a street party even though this year’s event was cancelled.

The fun took place in St Mark’s Road throughout Saturday afternoon despite the rain.

About 60 people enjoyed food and drink, including Pimm’s and barbecued hot dogs.

The residents had decorated their houses to look like landmarks along the regatta course.

One was decorated with a pink hippopotamus and bunting to represent Leander Club.

Another two had a marquee in their front gardens to represent the Barn Bar and champagne tent. There was bunting along the pavements and each side of the road featured a marker that indicated whether it was the Berks or Bucks side of the River Thames.

Joy Ferguson had decorated her house with a giant Union flag and bunting, a cardboard Temple Island and a friend’s canoe.

Her husband Tim made the skip in front of their neighbour’s house look like a boat.  It was decorated with a flag, cardboard chimney and parts of an old paddling pool and had a name tag which read “HMS Skippy”.

There was entertainment for children, including a tub of water and toy ducks.

Noah Money, four, and his brother Timo, two, were invited to take part in a fancy dress “boat race” along the pavement.

Noah was dressed in a cardboard Noah’s Ark with cuddly toys and Timo wore a cardboard steamboat. Noah won the race and also took first prize in an art competition for his drawing of Noah’s Ark. The brothers were supported by their parents Kevin and Carola.

Liss Breinholt, a neighbour, made mock regatta passes and badges with an online graphic design app. She said it was nice to mark events with her neighbours because it involved everyone. Mrs Breinholt said: “It has given us a little project and we’re all working on part of something bigger and interacting with other people. It has brought the community together.”

Mr Wyatt said: “It’s nice to celebrate in some way because there’s a strong community spirit in this road. Normally, we would be down at the regatta this weekend, drinking Pimm’s and people-watching.” Mr Kenyon, of St Andrew’s Road, said: “The town has been so quiet without it. It’s just nice to be able to get out and celebrate.”

Ed Bradley said: “It’s good to get the community out and about and show a bit of resilience.

“No one knows when this is all going to be back or how the regatta is going to look next summer. I think the celebrations we’ve had here have been heightened by covid.

“We celebrated VE Day as well and everyone has just looked out for each other during lockdown.”

Mr Ferguson said: “It was a blast. We had a great time and everyone was happy.

“So many events have been cancelled and are not happening because of covid, so it’s nice to do a few things to make sure the summer is still nice and fun.”