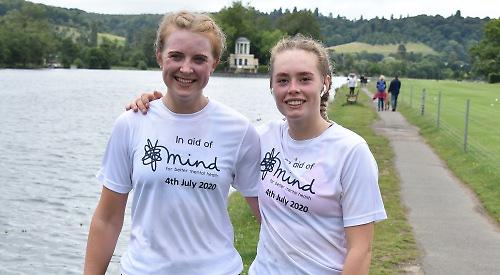 TWO friends ran 27 miles from Wallingford to Temple Island in Remenham in order to raise money for charity.

Jenny Bates and Elle Nash, both 21, completed the distance in a morning, running non-stop.

They were accompanied by Henry Bailhache-Webb, head rowing coach at Oxford Brookes University, where Miss Nash is part of the women’s squad.

He helped them with directions and by holding gates open so they did not have to stop.

The women were raising money for the mental health charity Mind because of the strain the coronavirus lockdown has placed on people.

They began their run at the boathouse at Oxford Brookes and followed the Thames Path through Goring, Pangbourne, Reading, Sonning, Shiplake and Henley. Miss Bates, from Reading, said: “The first half was quite fun as we had people supporting us, which was really good.

“Then we had a couple of really nasty hills, which wasn’t fun, but we had some energy gels to keep us going.”

“A friend was cheering me on the river from a paddleboard. That was really nice. It gave me a big push and made me feel I could keep going.

“At that point we had about 10 miles to go and my legs felt awful.  The last bit was a real challenge. I had a second wind with five miles to go but my legs were dying.

“As we were approaching Henley, it was so rewarding and I felt so relieved but I had never experienced pain quite like it. It was horrendous.”

The women reached the finish line near Upper Thames Rowing Club in four hours and 35 minutes.

However, they then had to keep going as their supporters had walked along the towpath in the direction of Temple Island.

Miss Bates said: “I was so annoyed. It was really horrible. I was on my hands and knees when I finally finished.” The supporters included her parents, Nick and Christine, and they all had a picnic together and then the two women went to Leander Club to celebrate.

Miss Bates said: “It was a good night there with lots of rowers.”

The women raised over £700, more than three times their target.

Miss Bates said: “It was really positive to see people supporing us. We’re pleased we have helped make a difference and it makes the run worth it.”

She also thanked Mr Bailhache-Webb, saying: “He was really useful and knew the way.”

AllMarkOne photography took pictures of them en route as Miss Bates is part of the company.

The women, who met at Hartpury University and Hartpury College in Gloucestershire, which they represented at Henley Women’s Regatta in 2018, also raised money via a raffle with prizes including 2kg of sweets.