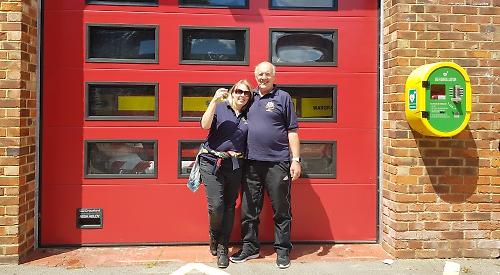 FIREFIGHTERS past and present bade farewell to Wargrave station.

About 25 current and former members of the crew and their families met outside the Victoria Road station on Saturday afternoon to share memories.

Royal Berkshire Fire Authority closed the station, the oldest and smallest in Berkshire, at the beginning of July, three years after it first talked about the unsustainable cost of keeping it open.

The gathering was organised by Chez Annetts, whose father Tony, 68, was a firefighter for 43 years. She campaigned to keep the station open and said she was concerned for the safety of the village when the closure was eventually confirmed.

Ms Annetts, 43, of Kings Acre, Wargrave, said: “It was a really nice event. Everyone socially distanced appropriately and it was just really nice to reminisce and catch up with old friends.

“I was at my dad’s house talking to him about the station being closed and he said it would be nice to get everyone together.

“We put it out there to see how many people would be interested and we were overwhelmed with messages of people who said they would come, even if it was just for 10 minutes or for an hour.

“We were missing a few of the crew who wanted to come, but they have moved on to other stations. They started sharing all these stories and it was like 20 years hadn’t passed.

“It was really nice to see people after such a long time and there were family members of crew that had passed away.”

Her father, who was in charge of the station for 36 years before he retired in 2012, lives in Highfield Park.

Ms Annetts gathered 240 signatures on a petition asking for the station to be saved in 2018.

The station, which first opened in 1903, was run by retained firefighters. They have all been given the opportunity to work elsewhere within the fire service.

It was first recommended for closure in April 2017 but the decision was delayed by 12 months in order to give the crew time to improve their availability and then delayed again by nine months in October 2018. It was put on hold yet again for six months following a meeting in December, when the general election was about to take place.

The crew was asked to achieve an availability target of 60 per cent, something it has consistently failed to do, partly due to the loss of experienced staff. In May, the figure was only 2.8 per cent.

At a meeting of the fire authority last month, members were recommended to approve the closure in order to help overcome a budget shortfall of £284,000.

Ms Annetts, who is a teacher at Highmoor Nursery, said she was proud to have fought for the station’s future and hoped the building would be offered to the community.

She said: “Growing up and having a dad who was a firefighter was the best thing ever. I was always extremely proud of him and I still am.

“My favourite memories are of him coming into school to do safety talks and I would sit there thinking ‘that’s my dad’. I felt special and everyone in the village knew who my dad was. I wasn’t Chez Annetts, I was Tony’s daughter.

“I would like it to be used by the community. I am not sure how, whether it is the Scouts or Brownies. It would be really sad to see it turned into housing.

“It is a strange space, but I think it is an opportunity to make it into something for the community. The old station in Henley was turned into an art gallery and one of the chaps thought it would be nice if it could be a fire safety museum.”

She added: “I don’t have any regrets. I would have done it 10 times over if I had to. It was always worth saving and now we have got to find a different way of keeping everyone safe.”

In making the decision to close Wargrave station, the fire authority said the majority of the fires that occur in the village were dealt with by crews from elsewhere.

Members were divided over the matter, but agreed by 11 votes to seven, with two abstentions.