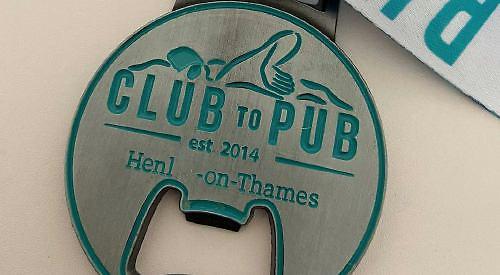 ANYONE who has completed Henley’s Club to Pub swim will already have an unusual medal that doubles as a bottle opener.

That’s because participants receive a bottle of Braskpear beer at the end.

However, this year’s medal is even more of a keepsake, albeit not intentionally on the part of the organisers.

The manufacturers managed to miss out the letters “ey” at the end of Henley, so the inscription reads “Club to Pub, est. 2014, Henl   -on-Thames”.

The organisers managed to turn the error into a positive. A Henley Swim spokeswoman says: “It seems appropriate to have a not-so-perfect medal in this crazy year.

“We have been fully refunded by the factory and will be donating this money to Sue Ryder, our charity partner.

“After a tough year for all charities, I’m sure we can all agree this is a fantastic gesture and will be well received.”