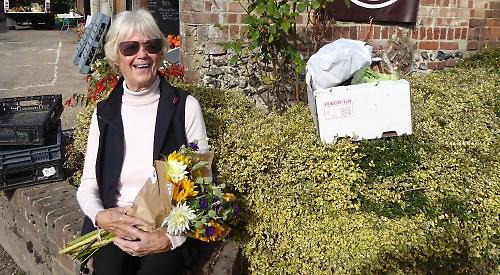 The independent school in Bell Street took part in the World’s Biggest Coffee Morning for a day when pupils and staff were asked to make a donation of at least £1.

They were served 400 cupcakes made by the school’s catering team, led by Emilia Rozanska.

The cupcakes were decorated with different coloured icing and toppings, including fruit, sprinkles and marshmallows. All of them were dairy- and nut-free and there were also gluten-free ones.

At the end of the school day, more cakes were given to parents collecting their children in return for a donation.

A total £573.68 was raised with online donations still to be added.

Macmillan’s normal coffee mornings couldn’t take place this year due to the coronavirus so the charity needed supporters to come up with alternatives to raise money.

Nick Armitage, who took over as headteacher of Rupert House at the start of term, said: “We considered how we could still make the Macmillan coffee morning work because it has been something the school has supported in a big way.

“Previously, we have had parents making the cakes and bringing them into school but, sadly, we couldn’t do that this year.

“Emilia was delighted to make some cakes and the children were delighted to have those at lunchtime. As we had some left over, we sold them to parents. I’m keen that we continue to support charitable causes. It is important that the children grow up understanding that we should be helping people who are less fortunate or who need our help.”

Meanwhile, the annual Macmillan fundraiser held at Swiss Farm in Henley also took on a different form and raised more than ever before.

Typically, the team at Swiss Farm Kitchen would provide cakes and refreshments to raise money. Instead, resident Janet Roberts, 60, who has been organising the event for five years, distributed vouchers to the 80 homes on site entitling the recipients to a free cup of tea or coffee in the kitchen.

The residents also received an envelope to make a donation and were encouraged with the chance to win a raffle prize. First prize was a package of produce and flowers from Bosley Patch, which was won by Pam and Tony Hewett.

Second prize was a hand-painted silk scarf, which was won by Carol Miller, and the third prize of six hand-crafted cards went to Trisha and Frank Jones.

Mrs Roberts, who is a carer, said: “This is the most we have ever raised. Considering everyone on the site is retired, I think we did pretty well.

“I am glad I could contribute some prizes to encourage people to donate to this worthy cause.

“I lost my husband [Paul] to cancer 10 years ago. He had a brain tumour and that is the main reason I started doing the coffee mornings.

“We have certainly raised more than £1,000 since we started doing it and we must be heading towards £2,000.

“Everybody has somebody in their family who has had cancer at some point, so it is always something people want to support and because people couldn’t get around this year, this is the sort of thing they can do without putting themselves at any risk.”