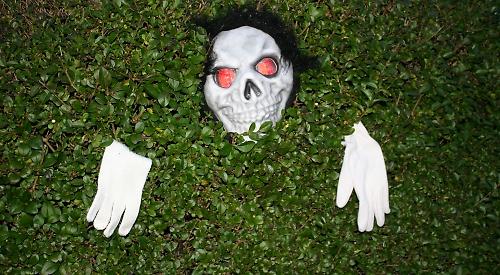 MORE than 270 households in Caversham and Emmer Green took part in a socially distanced Halloween trail on Saturday.

Residents decorated their houses and gardens with spooky items including jack o’lanterns, cobwebs, fake blood, gravestones and dummies dressed as witches, ghosts, bats and other figures.

Some also put out dry ice machines which blew fog across their driveways or set up speakers playing groans, wails or eerie music.

Families from across the area put on Halloween costumes and followed the trail using an online map created by the Warren and District Residents’ Association, which organised the event.

Every household was given a poster urging passers-by not to knock on front doors in order to prevent the spread of coronavirus. Participants included Mike Lelliott and Hester Casey, of Hemdean Road, Caversham, who set up a string of orange “pumpkin” balloons running down from an upstairs window to their front garden.

They also had a “grim reaper” face with flashing red eyes which protruded from their hedge.

Others left hand-prints and the message “help us” smeared on their windows in fake blood or decorated cars to look like jack o’lanterns.

Caroline Foulkes, of Caversham Park Village, came up with the idea as she wanted to create an alternative to trick-or-treating for families with children.

She spread the word online and Kevin Miles, whose wife Elisa is chairwoman of the residents’ association, created the map which was viewed more than 9,000 times.

Mrs Foulkes said: “It was amazing - everyone in the community embraced it and it was good to celebrate Halloween in a totally safe way.

“It meant children could enjoy themselves without neighbours having to worry about people knocking on their doors. We’ve had some really lovely comments.”

Now the association might organise a “winter wonderland” trail in the run-up to Christmas, possibly with a fundraising element.

Mrs Miles said: “With another lockdown coming we’re definitely keen to do something similar at Christmas. It would be a good way to involve older people who perhaps aren’t as interested in Halloween.”