Mum organises spooky trails instead of trick or treat 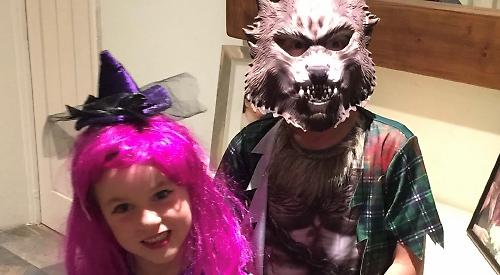 ABOUT 50 families took part in an alternative Halloween celebration in Wargrave.

Rebecca Strode and her family always look forward to trick or treating but were unable to do that this year because of the coronavirus restrictions, so she organised two trails for children to follow.

Instead of collecting sweets from their neighbours, the children had to find a letter at each house to spell out an eight-letter word. Everyone was asked to follow social distancing guidelines during the event.

Mrs Strode, an accountant who lives in Purfield Drive with her husband John and children William, 10, and Thea, five, said: “It was nice to be able to get out with the children safely and still celebrate Halloween. Other than Christmas, it is probably our favourite time of the year.”

She publicised the event on social media and recruited 16 houses to be part of the trails.

One covered Langhams Way, Purfield Drive and Newalls Rise, while the other went from Highfield Park to Victoria Road.

Mrs Strode said: “The idea was to go to each house on a trail to spell a spooky word, one of which was ‘cauldron’ and the other was ‘skeleton’.

“It was really lovely to see the effort that was put in to create some amazing displays. Everyone put on a great show.

“Everbody was very respectful of the rules and we didn’t have anybody knocking the doors.”

Her son dressed as a werewolf and her daughter as a vampire.

“They really enjoyed it and it didn’t detract from the enjoyment of Halloween itself,” said Mrs Strode. “It was nice to give them something to look forward to in this crazy time.”