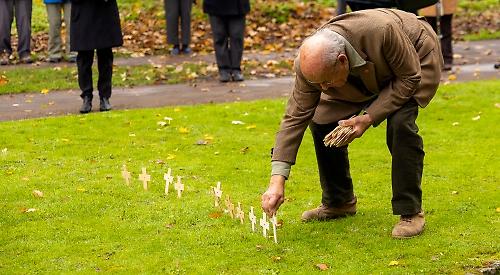 A SMALL ceremony was held in Wargrave to mark Armistice Day.

Members of the Wargrave branch of the Royal British Legion wanted to mark the occasion on Wednesday last week as the usual Remembrance Sunday parade and service on Mill Green was cancelled due to the coronavirus pandemic.

They met at the war memorial on Mill Green shortly before 11am to observe a two-minute silence.

Members then laid 69 wooden poppy crosses in front of the memorial, each featuring the name of a man or woman from the village who died in service in the world wars.

Mr Smith said: “We order them every year through the Poppy Appeal. When we have a proper service, we usually have descendants of people who have died that travel halfway across the country just to place a poppy on the ground. Last year, someone came from Cornwall.”

Among the Legion members in attendance was 95-year-old John Fryer, Wargrave’s only surviving veteran of the Second World War.

Mr Fryer, who lives in the Walled Garden and is a parish councillor, joined the Rifle Brigade when he was 18.

He was part of a team that supervised the transport of thousands of German prisoners of war back home after the Allied victory.

Mr Fryer said: “In previous years I have laid a wreath but this year I just observed the readings. I was very pleased to be there. We owe them a great deal.”

Mr Smith, who lives in the Ridgeway, said: “We asked people to follow the social distancing rules and they did. We couldn’t organise anything official this year but you can’t keep people away from the war memorial on Armistice Day. People like John Fryer would be there come hell or high water.

“I thanked everyone for coming and I said it was a shame that we couldn’t have a proper service because of covid.

“There have been a lot of mixed messages this year — the Prime Minister said it would be okay but local authorities have said you shouldn’t do it. The memorial is a public space, so you can’t keep people away from it.”

Legion members have not been able to make door-to-door collections for the Poppy Appeal this year but an online donation page has raised more than £5,500. To donate, visit justgiving.com/
fundraising/wargravepoppyappeal2020