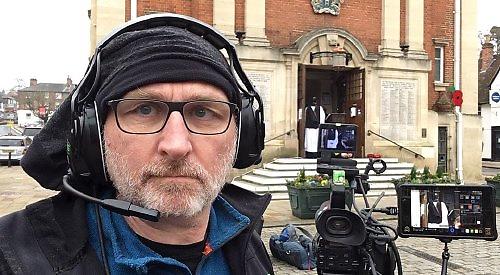 THE son of a war veteran says it was an honour to live stream Henley’s Remembrance Sunday service.

Videographer Richard Pinches was approached by the town council after it was decided that only 30 people could attend outdoor events under the latest coronavirus guidelines.

As it happened, more than 100 people gathered in Falaise Square while observing social distancing.

Mr Pinches, who lives in Marlow Road, has run Meadows Farm Studios since 1988 and he has interviewed survivors of conflict, including Henley veteran Dick Charlton, to ensure their memories live on.

“I worked with a couple of people to help with the streaming side. We planned where we would place the cameras and we spoke with the council about the service order. We did a test and we supplied our own internet connection.

“As a back-up, I filmed all the speakers in the studio a week before, just in case there was another covid emergency and the service had to be put on hold. We had a video ready to go in case of a problem. It was a big honour and I was very pleased to be asked and I was very happy that it went smoothly.”

He arrived in Market Place two hours before the service started to set up the equipment. He manned a camera at the bottom of steps of the town hall, while another was positioned further back in Falaise Square.

Mr Pinches, 55, said: “I would say it went very well. There were more people there than I thought there would be but you can’t exactly stop them. They all seemed to be wearing masks and they were socially distanced.

“I was helped by Max Tilney and Mike Clarke. Max was inside telling us which of our cameras was live. We’ve had a lot of good feedback from people who couldn’t be there.”

The video, which has been watched more than 1,000 times, was seen around the world and Mr Pinches said he has had positive feedback from as far away as Australia.

As well as streaming the Remembrance service, Mr Pinches produced a compilation of the veterans he has interviewed.

Mr Pinches has raised thousands of pounds for the Royal British Legion over the years with initiatives including a sponsored walk while dressed as an infantryman and not having his hair cut for a year.

He would usually take part in battle re-enactments across the country but these have all been cancelled due to the pandemic.

The video is still available to view online at bit.ly/3f5MeYV