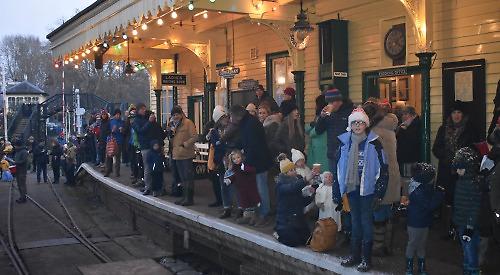 Families were invited to watch and take part in the traditional show  at Somersham station on the Fawley Hill estate, the home of Lady McAlpine.

Visitors included TV presenter Ben Fogle, his wife Marina and their children, Ludo and Iona, who live in Fawley.

The performance, which was staged on the track and station platform built by the late Sir William McAlpine in 1960, featured around 30 children from Fawley and the wider area.

Some of the actors were taken to the hay bale stage in the “stable” on a British Rail 03 class diesel shunter, which belonged to Sir William.

The audience watched from the platform as the start of the play was signalled by a fake snowfall.

Mary was played by six-year-old Molly Swinglehurst, from Fawley, for the second year in a row, while her brother Max, 10, was Joseph.

Molly arrived at the inn on a “donkey”, which was actually a pony, and the crowd laughed when she was told by the Angel Gabriel (Woody Hamilton Hurst) that she would be giving birth.

Other animals were played by children who crawled along the track on all fours, being careful to avoid a deposit left by the pony. These included Iona Fogle, who wore a dog onesie.

Brothers Barnaby, Rafferty and Toby King, from Cookham, played the three kings, while other children were dressed as shepherds and angels.

The narrator was Julia Ogilvy  while Tiggy Willett followed the child actors with a script and microphone to ensure they knew their lines.

Carols were sung throughout, including O Little Town of Bethlehem, Silent Night, While Shepherds Watched Their Flocks, Away in a Manger, We Three Kings and O Come, All Ye Faithful accompanied by Suzannah Shaw on a keyboard.

The final song was We Wish You A Merry Christmas and the performance ended with more fake snow as Father Christmas walked up the track with a sackful of presents for the children.

Bucket collectors took donations for  St Mary the Virgin’s Church in Fawley and the Chiltern Centre in Henley, which provides respite care for disabled young people and their families.

Lady McAlpine said: “It was definitely the best one yet, although that probably had something to do with the fact they had a rehearsal this time!

“What I loved this year was the number of children who turned up in costume and wanted to join in. We had so many spare shepherds and angels.

“Knowing how many people turned up, it is definitely something we will do again. It is a Fawley event and my husband used to absolutely loved it.

“It brings everybody together and I think the nativity story is something very special. It is important to remind people that Christmas is about more than Santa and presents. It is a special event and because it is outside you can have lots of people.

“I hope when I’m not here anymore that the new owner will want to put it on but I’m not planning on going anywhere yet.”

Daisy, seven, Alfie, five, Asha, five, and Jacky Paice, from Henley, were selling books to raise money for Fawley church. Mr Fogle brought along copies of his book Inspire: Life Lessons from the Wilderness for them to sell.

Health and safety volunteers gave out hand sanitiser and this was also available at different points throughout the station.