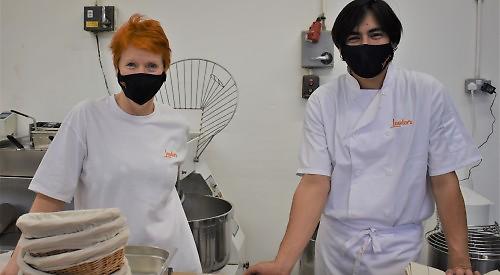 A FAMILY bakery in Henley which was rescued from closure re-opened on Monday.

Lawlors at Henley Enterprise Park, off Greys Road, has been refurbished after being bought by David Rodger-Sharp, who owns the jewellery shops of the same name in Duke Street and Bell Street.

He will open a café and shop at the former Sole Man cobbler’s unit in Duke Street tomorrow (Saturday), which will sell hot and cold sandwiches and sushi.

Mr Rodger-Sharp has hired five new staff, including head baker Tona Erreguin, who will split their time between the bakery and the café.

Tona, who recently moved to Henley from Mexico, said: “I enjoy baking. The team will grow more as we have stuff to do. We’ll be here every day, including Saturday, ready for the opening of the shop.” Annie Arscott, who will work in the retail side of the business, has been helping bake brownies, bread and lardy cakes ahead of the café opening.

She said: “We’re trying to get familiar with all the stuff like the ovens and trying out a couple of things

“The idea is to just get going. It’s a good time at the moment with some othher businesses coming out of lockdown as well.

“The bread making is a real skill and we’re looking forward to supplying it to businesses in Henley.

“The nice thing is that you’re taking on a name and we have the opportunity to develop it.

“We want to work with people to see what they want and need.”

Mr Rodger-Sharp, from Peppard stepped in after owners Mike Lawlor, the son of founder John Lawlor, and his business partner Anne Baker announced they were retiring as the ongoing coronavirus lockdown had made it impractical to continue. The pair are continuing as advisors.

He said he bought Lawlors to keep the historic name alive.

The company was founded in London in 1948 and moved to Henley in 1956, occupying units in Reading Road, Duke Street and Market Place at various points. Its old oven still stands in the Crockers Henley restaurant in Market Place.

Mr Rodger-Sharp will run the bakery with his business partners Marc Maslin, a chef, and Andy Byerley.