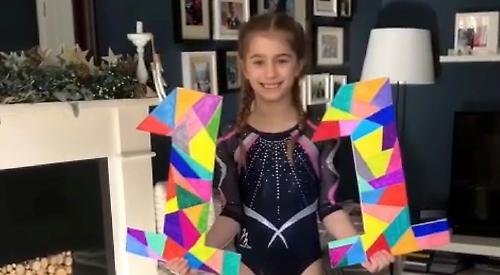 AN Olympic gymnast gave a virtual gym class for youngsters in Henley.

Claudia Fragapane, 23, spent an hour training about 22 children from the Springbox Gymnastics Club and then chatted with them.

The club, which is for children aged two to 16, has been closed since December due to the coronavirus pandemic.

Fragapane won four gold medals at the 2014 Commonwealth Games and was part of the women’s gymnastics team that won Great Britain’s first ever team medal, a bronze, in the world artistic gymnastics championships in 2015. She went on to compete at the 2016 Olympics in Brazil.

Springbox, which normally meets at the Rotherfield campus at The Henley College, organised the class to help prepare the children for when the club re-opens next month.

Caroline Sweetman, who has been running the club since 1990, said: “Claudia took the gymnasts through a warm-up and a fantastic dance/gym routine.

“She then stayed for questions. The gymnasts had a fantastic time.”

Her daughter, Carly Hughes-Belcher, head of squad, said: “It was a great session. The kids really loved it. We are going to use the routine for future lessons and competitions.”

Recently the club also organised a virtual gymnastics competition in which more than 60 children aged four to 16 took part at home and won awards.

Mrs Sweetman said: “It was so lovely looking at the videos. They all were so good, which made the judging and deciding the winners of medals and awards hard.”

She had started to organise a 30th anniversary celebration for the club before it was first shut by the first national lockdown a year ago.

Mrs Sweetman said: “In June we were able to re-open and offer outdoor classes and one of the most amazing and satisfying things was listening to the children screaming and laughing with the enjoyment of exercising with others.

“By September we were allowed back inside and it was so good to be back but it was a lot of planning and working to make it covid compliant and safe.”

The club will resume normal classes on April 16.