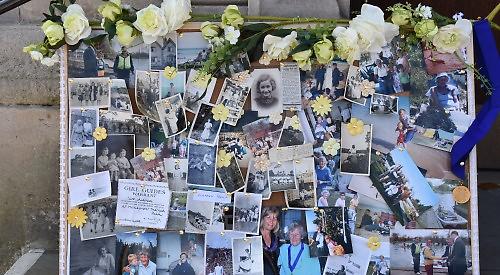 TWENTY mourners met outside Henley town hall on Tuesday to watch the funeral procession of a community stalwart.

Mary Aldred, of Luker Avenue, passed away at home on March 11, aged 90. The mother-of-two had lived locally for most of her life.

She was part of a pressure group which successfully lobbied for the new Henley leisure centre, off Gillotts Lane, in the late Seventies.

Her funeral was held at Reading Crematorium on Tuesday with limited attendance due to the coronavirus pandemic.

The procession drove slowly past the town hall in Market Place where family, friends and Mayor Ken Arlett stood to pay their respects. Former mayor Gill Dodds also attended as she had presented Mrs Aldred with the town medal in 2009 for her work in the community. There was also a board displaying old photographs, Henley Standard clippings, flowers and Mrs Aldred’s medal.

Her daughters, June Buckett, 63, and Yvonne Gale, 60, joined the procession, which took them to the crematorium in All Hallows Road, Caversham.

Mrs Aldred, who worked as a laboratory assistant at RTSA, a textiles company in Pack and Prime Lane, Henley, had backed the pool campaign because Henley had no indoor facility. The only swimming venue was the town’s outdoor baths off Wargrave Road, a shallow, fenced-off section of the River Thames which couldn’t be used in winter. After the pool opened, she taught lifeguards as a member of the Henley Life Saving Club and became involved with the RNLI and the Thames Rescue Service, whose volunteers patrol the river during major events like Henley Royal Regatta.

Mrs Aldred also ran a Brownies group for several decades until about 10 years ago. She remained an active member of the Trefoil Guild for retired leaders after stepping down in the Eighties.

Mrs Gale told the Henley Standard last week: “She was involved in so many activities and got a lot of satisfaction from them.”