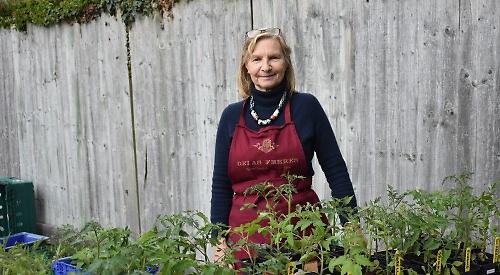 A PLANT sale raised £1,038 for the Thames Valley Air Ambulance at the weekend.

Haydn Jones, from Bix, and Diana Knight, from Middle Assendon, set up stalls in their gardens at the weekend offering homegrown tomato, courgette, pumpkin plants and chilli seeds and trays of spinach in return for donations.

This is the sixth consecutive year they have raised money for the charity and their customers are neighbours and passers-by.

Miss Knight said: “Despite the odd weather, we had a fantastic turnout. We want to thank all the people for their very genus donations but there are lot more lovely plants left to go so will be running it again this weekend.

“Lockdown last year helped us because people were stuck at home and found the joy in growing something as they were at home to keep an eye on it. This year we have had people come back who were first-time growers.”

Mr Jones sows the seeds in March and Miss Knight then pots them up the following month.

She said: “It’s physically quite demanding doing the potting and standing up all day but when you see the response from people and the excitement they get from growing things, it’s nice.”

The pair hope they can beat last year’s total of about £1,800 by selling more than 1,700 plants. Miss Knight said: “We don’t set prices because it’s more important for us that people donate what they want.”