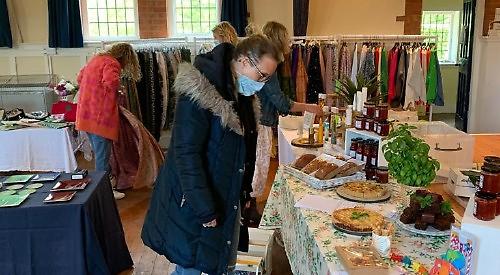 ABOUT 50 people attended a socially distanced shopping experience at the village hall in Crazies Hill.

Each visitor had to book a
45-minute window as numbers were limited and wear a face mask.

Organiser Jessica Morane-Griffiths said the success of a Christmas bazaar in December, which was sold out, helped to make this event run smoothly. She said: “We learned from last time that people wanted to see more of the same high quality exhibitors, so we reached out to some contacts and brought in a wider range of stalls.

“Fifty people was pretty much the limit we could have.

“People liked being given the opportunity to shop in a socially distanced way.

“They also enjoyed the atmosphere we created. We decorated the hall with flowers, balloons and bunting.

“The idea was to recreate the feel of an old-fashioned fete with a broad variety of well-made, original products. We made a big effort to style the event.”

Stallholders included Catherine Mun-Gavin, who lives in Wargrave and runs her own business called Save Thyme Cooking.

Admission was £5 per person which was redeemable against purchases of £20 or more. Mrs Morane-Griffiths, who lives in Warren Row, said she was looking forward to holding another event in the autumn and hoped to increase the attendance as the coronavirus restrictions are scheduled to have been fully lifted by then.

She said: “It will be be nice to have more of an open house.

“The village hall is a great location and it is very handy being positioned between Henley and Wargrave. If we do want to have a bigger event in the future, we may need to come over to the Henley side of the river. It really depends on the social distancing situation.”