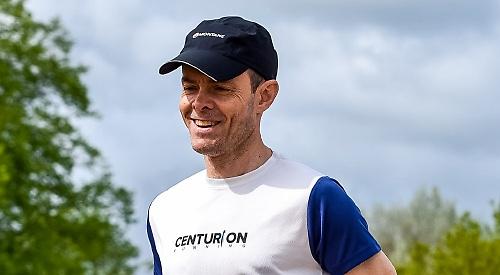 A MAN from Goring won a running event in the village without realising it.

Philip Woolfall completed the 26.2-mile marathon at the Goring Gap Run but didn’t discover his time of three hours, 33 minutes and 55 seconds was the fastest until later.

This was because the event also featured a half-marathon and a 50km “ultra” challenge through the South Oxfordshire countryside with a total of 722 entrants.

The routes started in different places and followed trails along the River Thames between Wallingford and Mapledurham before converging to finish outside Goring village hall in High Street.

Mr Woolfall, 48, of Fairfield Road, said several runners finished ahead of him, so he assumed they were running the full marathon like him but in fact they were taking part in the half marathon.

It was only when he got home and checked the official website that he realised he had won his event.

Mr Woolfall, who took up running about eight years ago, said: “I wasn’t expecting to win as I didn’t think I ran particularly well.”

He was on course to finish in about three hours and 10 minutes but during his 19th mile he hit “the wall”, meaning his body had run out of sugar to fuel him and he had to slow down until he reached a feeding station at the outskirts of Goring.

He ate a cereal bar and some energy sweets which got him over the line.

“I was very much saved by the aid station,” said Mr Woolfall. “By the time I arrived there, my stomach wasn’t at all happy.

“I was hoping to finish a little quicker but it’s on par with my previous times.

“It was a really nice day — the weather was a bit uncertain but I was lucky because the heavens only opened as I finished.

“Despite the awful forecast, it wasn’t too muddy or rainy and the location was great for me. It was motivating to know I was never further than walking distance from home.”

Mr Woolfall, who works in the engineering industry, has run two marathons and a 100km (62-mile) ultra-marathon previously and continued training during the coronavirus lockdowns. He said: “After more than a year of lockdowns on and off, it’s great that everyone had a chance to get out there and enjoy some exercise.

“I kept up running during the lockdown. It’s so important to be able to get out of the house, especially while working from home.

“People need exercise more than ever at the moment and this offered a supportive atmosphere for returning to it.”

The first local man to finish the ultra-marathon was Chris Moseley, 42, of Wargrave Runners, who came fifth overall with a time of four hours, 19 minutes and 50 seconds.

Mr Moseley, who works in finance, grew up in Wargrave, where his parents David and Janet still live, and his father is founder of the running club.

He has run marathons before and regularly enters the Wargrave 10km race but this was his first try at something longer. He also continued training in lockdown.

Mr Moseley said: “It was lovely to do a proper event again and there was such a friendly atmosphere among the marshals and runners.

“It was hard work and a bit of a struggle towards the end but willpower, support from other runners and the feeding station gave me the energy I needed.

“Considering that it was far longer than anything I’ve done before, this was quite a test and I was delighted to finish fifth.”

The first local woman was Leanne James, of Cleeve Road, Goring, who finished the ultra-marathon in four hours, 36 minutes and 13 seconds. She was cheered over the line by her husband Steve, who has previously run the London Marathon, and children Xanthe, 10, and Samuel, eight, who followed her handing out sweets with family friends.

Mrs James, 39, often competes in triathlons but this was the furthest she had run in one go.

She got into running about seven years ago, when she and a group of friends staged a race to raise more than £1,000 towards open heart surgery for her daughter.

She said: “This was a different kind of challenge but I wanted to take part because my usual fixtures in Europe kept being cancelled.

“It was brilliant — well-organised and on a beautiful course with a relaxed atmosphere. I couldn’t have asked for a better introduction to the longer distance.

“The hardest part was reaching the regular marathon mark, purely because I knew I’d never run further before so it was a psychological barrier.

“The final 10km was tough physically because it included the Hartslock bridleway at Whitchurch, which is a very steep slope through the woods. It was a relief to reach the flatter home stretch towards Goring.

“I’ll definitely try to run longer distances more often. The support from my family made such a difference and knowing the area helped the children appreciate how far I had to go.”

Chris Lucas, 29, of Montague Street, Caversham, was runner-up in the half-marathon in one hour, 21 minutes and 15 seconds. He said: “This was my first half-marathon in a long time so I was pleased with the outcome, especially considering the challenging terrain.

“I hadn’t done as much training as usual because my track sessions with Reading Roadrunners aren’t happening.

“It was a bit of a test and I wasn’t sure what to expect so placing second was a nice surprise.”

The mother-of-four, who runs a dental nursing agency, has always run for pleasure and has been racing since 2013, when she completed the Woodcote 10km.

She found the half-marathon difficult because it came only a few days after she took part in another race and her legs hadn’t fully recovered.

Ms Price said: “The course was relatively flat and not too challenging and the whole thing was well-organised and friendly.

“I felt nervous because this was only my second race this year but I was pleased with how it went.

“My family were very supportive and excited, although they didn’t come out on the day because they didn’t want to get wet.”

Due to the coronavirus pandemic, runners set off in waves to allow social distancing and there was no prize-giving ceremony. The event was organised by RunReading.

• For the other local runners taking part and their times, turn to page 31.