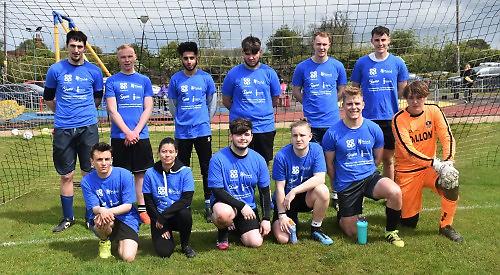 A team of players made up of staff from the Co-op branches in Bridle Path, Woodcote, and Wood Lane, Sonning Common, were pitted against a casual team from Woodcote that plays regularly at Langtree School.

The Co-op team, some of whom play for Wallingford Football Club, won 7-2 after being held 2-2 at half time in the 11-a-side match.

Their opponents, whose average age was older, said they enjoyed the occasion despite their defeat and hoped to have a rematch or take on their rivals at something else, such as rounders.

Hannah Savery, who manages the Woodcote Co-op, came up with the idea as many of her staff enjoy football and the Co-op nationally is supporting Mind.

The players paid to play and the rest of the proceeds came from the sale of refreshments at the match and a raffle with a prize of a football-themed hamper.

The game was watched by dozens of spectators despite some heavy showers, during which they sheltered under trees.

Miss Savery said: “We thought it would be a good laugh and a way of branching out to the community and we were really pleased with how it took off. The other team were very much behind it as soon as we approached them.

“It was a great game and I think we had a bit of an advantage with all the Wallingford players in our side. We will definitely consider a rematch.

“Sport has massive benefits for mental health because you feel great afterwards and it’s a great way to bring people together, which is important after the coronavirus pandemic.”

Billy Bowden, who captained the losers, who included some Woodcote/Stoke Row FC players, said: “The second half was tough going — we’ve got a lot of players in their mid-40s and the younger players’ legs were better at keeping up throughout the game. It was still good fun, at least for the first 45 minutes.

“We were very happy to take part as it was for charity and I’m sure we’ll all be up for a rematch.”