Pupils given taste of Japan with words, games and food 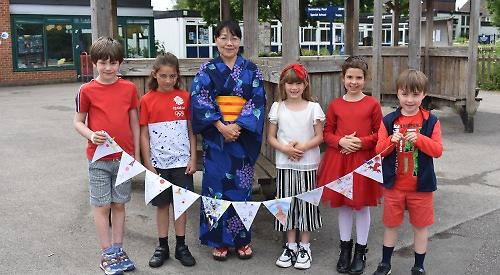 A JAPANESE language day was
held at Sonning Common Primary School to teach pupils about the language and culture of the country.

The children were taught Japanese words, numbers and games as well as taking part in some food tasting sessions with the school caterers, Kites Kitchen.

Martin and Samantha Seccombe, who have lived in Japan for 30 years, visited the school to teach years five and six about the language and how to play games such as rock, paper, scissors. Lisa Baillie, the school’s French teacher, said: “A lot of children won’t go to Japan but we can bring it to them.

“This really brings the language to life and helps them learn outside the classroom.” Ms Baillie, who has previously organised French, Spanish and Italian language days, added: “I’m so passionate about languages and what I love about this school is that everyone supports you.”