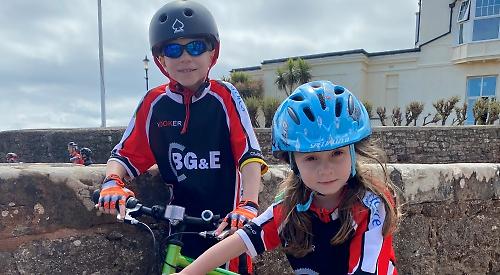 A BROTHER and sister from Goring raised more than £800 for charity by taking part in a sponsored bicycle ride in memory of their father and grandfather.

William and Eleanor Hooker, who are eight and five, each rode a stage of the Hooker 100km challenge in east Devon, which is now in its 15th year.

It was founded in 2007 to honour the youngsters’ grandfather Colin Hooker, who died of mesothelioma the year before that.

Their father Ivan Hooker took part several times before being diagnosed with sinus cancer in 2017. He died of the illness in September last year, aged 44.

The children donated proceeds to Sue Ryder, whose outpatient palliative care “hub” at Crowmarsh Gifford supported him in his final days.

William led 45 cyclists from the Beers, Gears and Engineers cycle club along a flat 1.3-mile stretch of between Bicton and Budleigh Hill. His sister then joined in for the 1.5-mile descent to the beach at Budleigh Salterton, where their father and grandfather both grew up.

The pair, who attend Goring Primary School, have previously raised about £300 for Sue Ryder by cycling around Goring with their mother Samantha Saye.

Ms Saye said: “Taking part in the ride was particularly poignant this year and was a real achievement for Eleanor, who only learnt to ride a pedal bike a few months ago.

“They chose to raise money for Sue Ryder because it helped their dad at home throughout his illness, especially in the last six months of his life, and is also providing bereavement support to me.

“They thought the ride was great fun and William was surprised but happy to have raised so much money. They’d like to thank everyone for their kind donations.”

William said: “Daddy was able to stay at home with us so we were together to read stories, have ice creams in the garden and say goodnight to each other.”