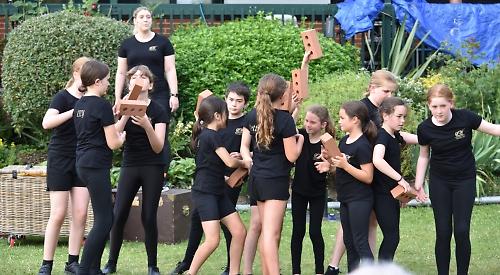 THE StageWorks performing arts school in Henley celebrated its 21st anniversary with two outdoor showcases at the weekend.

Children at the school performed on Friday evening and at noon on Saturday at the Eyot Centre, off Wargrave Road.

Guests brought chairs, picnic blankets, food and soft drinks to watch some of the best songs and dances from the past 20 years.

There were 15 performances in total which were directed, written and produced by Lloyd White, who runs the school’s Saturday class.

Some students in his class were self-isolating due to covid but narrated live over Zoom and had pre-recorded some songs.

The show was opened by a performance of One Brick at a Time from their Jack and the Beanstalk show where the children marched on set with “bricks” which they threw and passed to each other in time to the music.

This was followed by Call Me Maybe by Carly Rae Jepsen which the school performed in Aladdin and Hit the Road Jack from their performance of Babes in the Wood.

There were also two songs from the school’s performance of Cinderella which were When a Felon’s Not Engaged in His Employment by The Pirates Of Penzance and Marry You by Bruno Mars.

Act two featured In the Country from their The Wind in the Willows show, followed by two songs from Peter Pan, Hushabye Mountain and Reach, two from their version of A Christmas Carol and a Disney medley.

Emma-Jane Taylor, the principal of StageWorks, said: “They were brilliant. I was crying with emotion when I saw the four-year-olds singing their little hearts out.  We’ve achieved something great and for that I’ll aways be grateful.”

A collection raised £150 for the Riverside Counselling Service in Henley.

StageWorks’ next performance will be Jack and the Beanstalk  in November at the Kenton Theatre.