Good to rewind after the pandemic, says ‘doctor’ 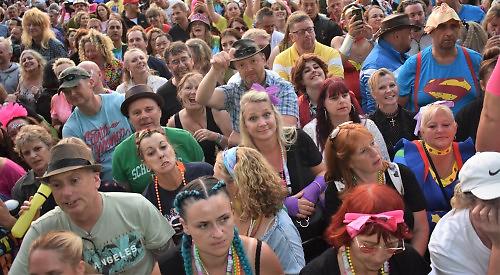 TENS of thousands of people celebrated the return of Rewind South.

The festival was cancelled last year due to the coronavirus pandemic and there were covid safety precautions in place for fans attending the Eighties pop music event at Temple Island Meadows in Remenham over the weekend.

Ticket holders had to show an NHS covid passport or proof of a negative lateral flow test in order to enter the site.

Otherwise it was business as usual for the audience of mainly older people, many of were in Dayglo colours or fancy dress.

There were characters from films such as Top Gun, Ghostbusters and The Blues Brothers, games stars Mario and Luigi and Pac-Man and even the Martians from the Smash TV adverts.

There were 22 acts at this year’s 12th Rewind and Saturday’s headliners were Jimmy Somerville’s Big Band-Tastic Boogie.

It was a “doctor” — Clive Jackson of Doctor and the Medics — who referred to the pandemic during his group’s set, which included an extended version of their 1986 cover of Norman Greenbaum’s Spirit in the Sky so that the revellers could sing the chorus over and over again.

He said: “This song is about the good that comes after the bad. We’ve had 18 months of ‘bad’ and this is the ‘good’ you all deserve. The lonely days are over at last and we’re back together, doing what we love.”

Jackson was also compere for the day and joked with the crowd in between performances while Henley DJ Jamie Taylor played several sets.

Trevor Horn, once of The Buggles but better known as a music producer, came on stage with singer Ryan Molloy from the cast of West End musical Jersey Boys, and 10cc singer and guitarist Lol Creme.

Horn, on bass guitar, played a set including The Buggles’ hit Video Killed The Radio Star and Relax by Frankie Goes To Hollywood.

Billy Ocean received massive cheers from the crowd when he appeared to perform some of his including When The Going Gets Tough, Get Outta My Dreams, Get Into My Car and Love Really Hurts Without You as well as Bob Marley’s No Woman, No Cry.

People were dancing on picnic tables throughout the set.

Altered Images played I Could Be Happy and their signature hit Happy Birthday.

Singer Clare Grogan asked if anyone in the crowd had a birthday and congratulated them.

She said: “I’m so nervous to be here and there are tears in my eyes because I haven’t been out for so long.

“Shall we all go out for drinks afterwards? We had so much fun in the Travelodge last night.” Wang Chung performed three songs including The Clash’s Should I Stay Or Should I Go, changing the lyrics to “Should we Wang or should we Chung”.

Swigging from a beer bottle, he said: “It’s hard drinking like this. I prefer to do it on my own in a darkened room while watching YouTube videos of myself from the Eighties.”

Nik Kershaw opened with his 1986 hit Wide Boy and also played The Riddle, Bring on the Dancing Girls and The One and Only from 1991, which he wrote for Chesney Hawkes. He played several elaborate guitar solos which received loud cheers.

Grandmaster Flash came on after a short video explaining how he learned to sample other people’s records to create new music. He stood behind a set of decks egging the crowd on and played a 30-minute medley which sampled classic funk tracks, including Apache by Incredible Bongo Band and (Not Just) Knee Deep by Funkadelic as well as pop, rap and rock hits such Jay-Z’s Empire State of Mind and Back In Black by AC/DC.

Jimmy Somerville was accompanied by a brass section and string quartet as well as Rewind’s house musicians.

The 60-year-old danced energetically around the stage as he opened with his 1989 cover of Sylvester’s You Make Me Feel (Mighty Real) followed by his 1987 hit Tomorrow.

He also played Smalltown Boy, with which his band Bronski Beat topped the US charts in 1984.

Somerville told the crowd: “It has been a long time since I was last at Rewind and from up here you all look absolutely ****ing smashing”.

Sunday’s programme was opened by Aswad followed by Peter Hook and The Light.

Hook, the co-founder and bassist of Joy Division and New Order, performed Blue Monday to shrieks of approval.

Peter Wylie of The Mighty Wah! was dressed in a spacesuit as he performed Sinful and The Story of the Blues (Part One).

Sarah Dallin and Keren Woodward, the two surviving members of Bananarama, and the Rewind All Star Band performed Cruel Summer, Robert De Niro’s Waiting… and Love in the First Degree.

Visitors were delighted at the return of the festival.

Adam Hedley, of Reading Road, Henley, said: “I’ve been coming every year since its inception. Even when I was living in China for two years, I always made a point of flying back to be here with friends.

“It feels absolutely fabulous to be back because it was a nightmare that it didn’t happen last year so this one is particularly special.”

Tim Richardson, of Marmion Road, Henley, said: “I’ve been to Rewind on both days of every year and I’m thrilled to be doing it again.

“There’s great music and a lovely atmosphere and it’s only just down the road from where I live, so what’s not to like?

“It has always been a very friendly festival and everybody is always polite.”

He said: “These are the two days of the year when we can be ourselves — we go back to the Eighties and absolutely love it.

“We’ve made wonderful friends here and there’s no feeling like looking over that spectacular crowd in front of the stage.

“You can’t match it and it’s a breath of fresh air that it can take place once more.”

Jonathan Barter, a former Henley town councillor, said: “I love Rewind and think Billy Ocean is always the star of the show. He is a fantastic performer and it’s an absolute privilege to have him here. his festival is great for the Henley community and especially, dare I say, the more mature age group.”

Jane Southern, of Newtown Gardens, Henley, who first visited in 2017, said: “I’m enjoying it just as much this time. I love the fact that nobody takes themselves too seriously.

“Everyone has gone to great lengths with their costumes and I’ve just seen an incredible Dick Dastardly and Muttley.”

Veronica Verdon, of Chiltern Gardens, Watlington, said: “It’s utterly fab. This is my first big outing in the UK for years because I’ve been living overseas since 2010 and the pandemic hit as soon as I returned, so all my plans were off.

“People are behaving sensibly so there’s no need to worry too much about covid. I’m very impressed with some people’s costumes. I wish I’d made more of an effort.”

Pamela McIntosh, from Wargrave, said: “I’ve been coming for eight years and can’t tell you how pleased I am. It’s quieter than usual but there’s a real buzz and the smaller crowd leaves more space to move around.”

John Woods, from Satwell, said: “We all feel safe from covid — we’ve been double-jabbed and the testing is rigorous so we’re just focusing on enjoying ourselves.”