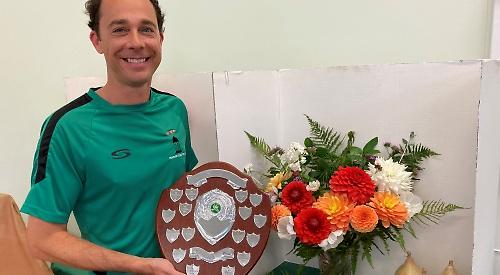 A DAHLIA grower saw off competition from his father to take several prizes at the Chiltern Edge Horticultural Society’s 60th autumn show.

Martin Hedges, from Emmer Green, won the classes for cactus dahlias, decorative dahlias and a vase of six mixed dahlias as well as best beetroot, French beans, runner beans, shallots and lettuces in the vegetable classes.

In the flower competition, he saw off challenges from his father Keith Hedges and fellow grower David Smith.

More than 100 people attended the event at Sonning Common village hall in Wood Lane, where five judges inspected about 211 entries.

The winner in each class received £1 while the second- and third-placed entrants received 60p and 40p respectively. Mr Hedges, a 50-year-old accountant, said: “It was a tough competition from my dad and David but it was good.

“It was because the weather was wet that the dahlias grew really big this year. It was bad for summer holidays but good for flowers.”

Mr Hedges, who has been competing in the show for about 10 years, grows most of his entries at an allotment in Gallowstree Common.

He said: “It does take a lot of time and it’s a hobby that works on trial and error.”

Mr Fooks, 44, from Sonning Common, said: “I’ve been a member for about five years. It was very fortunate for me that everything that I grew was looking its best for the show.

“I was pleased to win best in show for the carrots as I have not won that before. There was a lot more competition this year and the standard was better, which was really good.

“I find it that every year you learn something new, whether that’s failure or uccess. You can always improve so after doing it for many years you gradually get better and better but it’s always dependent on the weather.

“My daughters have done it before as well and it was Bella’s last year to enter as she will be too old next year.

“They were very pleased as it was something for them to get busy with over the school holidays.”

John Windass, vice-chairman of the society, said the committee was delighted with the success of the show, which was called off last year due to the coronavirus pandemic, as were the society’s spring shows last year and this year.

He said: “We were very keen to get back but weren’t sure how it was going to go as it was the first show in two years.

“The guidelines and the restrictions for covid have been relaxed by the Government but we wanted to be safe so we had a one-way system. To create this we needed a border and that was why we had most of the dahlia entries at the front so when the doors opened you just had this wall of colour.

“Over the two hours we were open to the public we got a steady flow of people so we are really pleased. In the second hour or so we had 20 or 30 people in the hall, obviously following social distancing.

“For the first time I had people stopping me to tell me how great it had been.

“We also received positive feedback from the competitors who said it worked better than previous years as it encouraged people to look at everything.”

Mr Windass, who won the best dish of any other kind of fruit category, said his personal highlight of the show were the vegetable entries.

“They have become really quite competitive,” he said. “The judges said some of them were of national standard. That said, we had members who had never entered things before and still managed to win in things like the tomatoes so we managed to cater for some experts and also encouraged some show novices.”