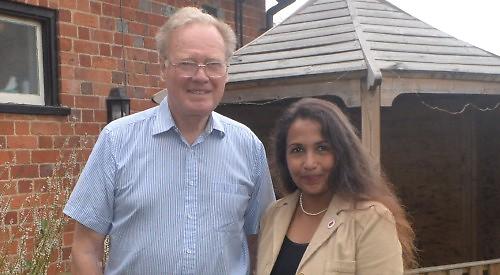 A RETIRED army officer has stepped down as Peppard’s Poppy Appeal organiser after two decades.

Nick Launders, 80, of Colliers Lane, has been a member of the Henley and Peppard branch of the Royal British Legion with his wife, Sue, since 1995.

When he joined he was a lieutenant colonel in the artillery and later worked in export licensing before retiring.

He became Poppy Appeal organiser in 2002 and also served as the branch’s vice-chairman and standard bearer.

He has stepped down as the couple are to move to Southampton to be closer to family.

Sara Abey, the Poppy Appeal organiser for Henley, will be taking the Peppard branch under her wing.

A party in celebration of Mr Launders’s work was held at the Unicorn Pub in Colmore Lane on Friday, attended by past and present collectors for the appeal. Sandwiches and chips were served on tables decorated with poppy covered tablecloths.

Mr Launders said: “It’s quite bittersweet. I’ve been doing Remembrance Sunday and organising that as well as the Poppy Appeal for a long time.

“When I first came here I was actually serving in the army as an artillery officer, which I did for about 33 years.

“We moved here in 1993 and I became a branch member pretty much straight away but I think a lot of these people, including my wife, were born here.”

The couple are moving to be near younger daughter Harriett, 45, who is a pharmacist in Southampton. They have three other children, Jason, 51, Lucinda, 49, and Ed, 43.

Mr Launders said: “It will be a wrench to leave. I have to give it up as we’re moving and I’ve just hit my 80th birthday and both myself and Sue are in failing health so I can’t keep going round knocking on doors.

“Peppard has been a generous village — we’ve raised about £3,000 each year.

“Now Henley will be taking over the organisation but it will take volunteers from here to make it work to get the boxes out to the businesses and houses.”

Mr Launders said he wanted to thank the people of Stoke Row, Peppard and Rotherfield Greys for their generosity as well as the volunteer collectors.

He added: “I realise that Sara is a very determined and brilliant organiser so I am hesitant to give her any advice but I think all I’d say is to try to get our volunteers involved in other activities, too.

“We support all volunteers without being members and getting people together like this is always an advantage.”

Peter Eldridge, chairman of the Oxfordshire Royal British Legion, surprised Mr Launders with a gift of a metal poppy pin. He said: “I really appreciate the amount of effort you put into the Poppy Appeal. I want to thank you and on behalf of the Legion. God Bless you both and all the best for the future.”

“A huge thank-you, too, to Nick’s volunteers who are staying on to help me. There is no Poppy Appeal without volunteers.

“It is an honour to inherit a long-serving team passionate about our charitable aims.

“I have served the Legion with Nick for a few years now. You can clearly see that it really matters to him. He did this on top of being a Poppy Appeal organiser, fundraising for the wider armed forces community who need our help, and I salute him for that.

“The extraordinary goodwill and bravery of the servicemen and women, past and present, humbles me. I feel privileged to be in a position to make things better for them when they are in need.”