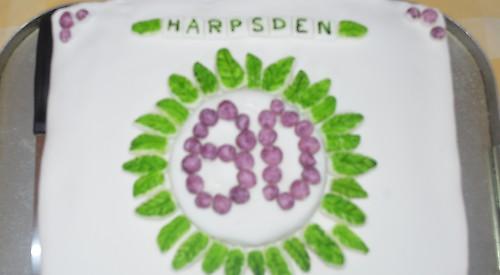 About 35 women met at the village hall in Harpsden Bottom to enjoy Prosecco and a fruit cake.

The cake was specially made by one of the members, Shirley Weyman, and was decorated with a big number “80” in green and purple icing, which are the colours of the WI (and the Suffragettes). Large helium balloons in the same colours were tied to the outside of the hall along with some pink floral bunting.

Archives were on display at the celebration, including the minutes of the first meeting. There was also a copy of Mrs Beeton’s Cookery Book, open at the page with a recipe for pig’s ears, and an old shopping list.

Suzanna Rose, president of the group, said: “We started in September 1941. In December that year this country faced a very uncertain future and though we’ve had a difficult last 18 months, we have a positive future but back then we didn’t know.”

Henley Mayor Sarah Miller, who attended the event, said: “Harpsden is a very special place for me. I went to Harpsden Parochial School over the road. The WI is the longest-running women’s organisation and I know in the past it has seemed like a club for ladies of a certain age but this has changed. I know all women have fantastic opportunities presented by the WI. It’s unique and provides educational opportunities. Harpsden WI have met in this wonderful village hall since 1941, which is a long time and I’m sure there are many wonderful stories to be told.”

The women listened to a talk by Mark Green about his 32-year career with the Berkshire Fire and Rescue Service. He is now a flying instructor at White Waltham Airfield, near Maidenhead.