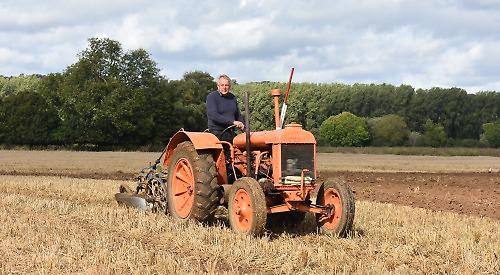 A total of 47 people competed at the 129th annual event, which was cancelled last year due to the coronavirus pandemic.

It was held at Frizers Farm in Sonning Eye, on the Phillimore Estate, and attracted hundreds of people in the sunshine.

The day began with the traditional blessing of the plough by Rev Stephen Cousins, associate priest for the benefice of Benson with Ewelme.

The participants used both modern and vintage tractors as they competed in categories including reversible ploughs, vintage trailed and vintage amateur.

One was helped by two horses called Titan and Spartacus.

The entrants had between 20 minutes and four hours to finish, depending on the category.

Points were awarded for the firmness, uniformity and general appearance of the furrows and deducted for mistakes such as finishing the wrong way or going over their time limit.

Jo Taylor, secretary of the association, said: “It was a fantastic day, especially as we had such appalling weather the day before.

“It was a real joy to see people show up. I feel my job is really rewarding and worthwhile when I see lots of people having a great time in the sunshine.

“Due to covid there is an element of risk with putting on an event. I think we were very fortunate that after the trustees and directors made the decision to go ahead that it really paid off.”

•More pictures from the ploughing match will be published in next week’s Henley Standard.