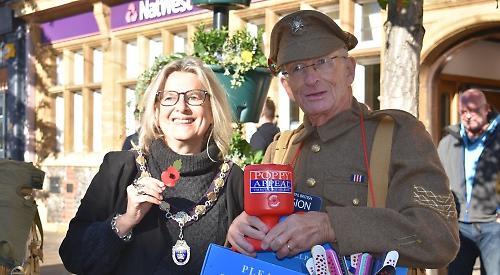 MEMBERS of the Henley Army Cadet Force sold remembrance poppies to the head students of Gillotts School to mark the start of this year’s Poppy Appeal.

Mayor Sarah Miller also bought a poppy from John Green, president of the Henley and Peppard branch of the Royal British Legion, at the event in Market Place on Saturday.

About 30 people gathered to watch the exchanges.

Cpl Grace Iveson began the ceremony with a speech about the appeal and what it represents.

She said: “It is not about pomp and ceremony, it is about marking when our poppy collectors go out into the community with a simple message.

“There are many past and present service people who need our help in numerous ways, from ongoing medical or other treatments to help in adjusting to civilian life.

“Covid has greatly hindered our collections over the last 18 months, so our collectors — all of us — have much to make up.”

Sjt James said: “I feel very honoured to be representing the cadets and launching the Poppy Appeal and getting the name of the cadets out there.

“It’s important for us to support the message and get involved.”

Abi, 15, said: “The Poppy Appeal is important as it’s not an older generation thing, it’s still going on.

“We represent the younger people and the generations coming together. We’ll be doing a minute’s silence at school and we’ll be giving out poppies.

“There will also be an assembly to explain why the poppies are handed out.” Councillor Miller said: “The Royal British Legion is one of the chosen charities for my year of office.

“It’s very important to me and it’s traditional for the town to come and see the Mayor buy the first poppy.

“My grandfather was a ‘Desert Rat’ and he never spoke about it but the support of the Legion was very important to him.

“It’s very important that we continue to support the Legion.”

Mr Green, who was wearing an original First World War soldier’s uniform and carrying a replica rifle, said: “All charities have suffered because of the pandemic.

“For some people life has just slowed down but the money raised by the Poppy Appeal goes towards a lot of soldiers and their families who suffer from physical and mental issues.

“We need to catch up with fund-
raising so we’re being as enthusiastic as possible.”

Anne Evans, who succeeded Mr Green as chairman of the branch last year, said: “The Royal British Legion is custodian of remembrance and it’s only by remembering and bringing attention to the past that we prevent it being repeated in the future. It’s great to see the cadets and young people out and involved.”

Sara Abey, the Poppy Appeal organiser for Henley and Peppard, said: “I am so proud of our Army Cadets and Gillotts School head students for leading this Poppy Appeal launch.

“For decades, the Poppy Appeal has been supporting the Royal British Legion to raise funds to safeguard the welfare of the armed forces community in need.

“The recognition of the charitable aims of the Legion by our younger generation and their positivity is humbling. I thank them immensely.

“I have also been moved by the dedication of our longstanding volunteers. In this centenary year of the Legion, this launch has been a celebration of these volunteer Poppy Appeal collectors being back in their communities. This small launch event has been a real community effort.

“I am very grateful to Catharine Darnton and Matt Druce, headteacher and assistant headteacher of Gillotts, and to 2Lt Mel Haynes, commanding officer of the cadets, for their enthusiastic support.

“Thank you to the town council for the free use of Market Place and and Gabriel Machin for furnishing. A special thank-you to Patrick Fleming, of the Henley-Falaise Leichlingen Twinning Association, and Laurence Wilson, of Magoos, for setting up the marquee in the pouring rain.”

Singer Rebecca Poole, alias Purdy, was due to perform at the launch but had to pull out after contracting coronavirus.

Also present at the launch was Richard Pinches, a registered street collector, who is also an 8th Army re-enactor.

Members of the Berkshire and Oxfordshire branches of the Military Vehicles Trust also attended.

David Thatcher and his son Josh, of Gainsborough Crescent, Henley, brought their restored 1942 Ford GPW jeep, which had been used by the US Army.

Last year, the service was scaled back due to the covid restrictions in place so there was no traditional parade or guard of honour.

Anne Evans, who chairs the Henley and Peppard branch of the Royal British Legion, confirmed the event would go ahead as normal.