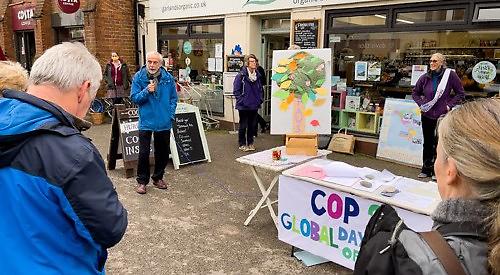 MEMBERS of the Pangbourne and Whitchurch Sustainability Group collected signatures for the global day of action on climate justice.

People were encouraged to sign a petition to be sent to Alok Sharma, the Reading West MP and president of COP26, and Henley MP John Howell.

The event was attended by Jim Donahue, chairman of Whitchurch Parish Council, and Rev James Leach, the vicar for Whitchurch and Whitchurch Hill.

The petition demanded the cessation of coal and gas production in the UK and the end of subsidies for fossil fuel excavation at home and abroad.

It stressed the need to reduce carbon emissions and for industrialised countries to financially support countries already affected by climate change.

People were asked to write messages on “leaves” which were pinned to an image of a tree.

Professor Sir Brian Hoskins, a climate scientist, spoke at the event about the need to fund adaptation, limit global warming to 1.5C and honour the $100 billion aid commitment agreed in Paris in 2014.

The event was held in Pangbourne village centre.